MOSCOW, June 19, 2018 /PR Newswire/ -- The China-Russia Dialogue About Quality event themed "international quality drives us to a better future" was jointly held by Chinese liquor maker Fenjiu Group and the International Exchange Center at the Moscow Representative Office of the China Council for the Promotion of International Trade (CCPIT) in Moscow on May 28. 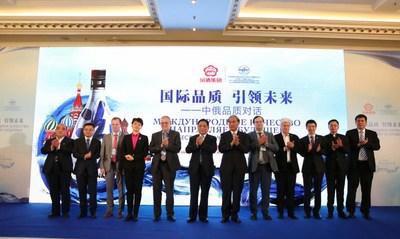 A few days prior to departing for Russia, Li Qiuxi, Secretary of the Party Committee and Chairman of Fenjiu Group, said in an exclusive interview with www.dragonnewsru.com, Russia's largest Russian and Chinese bilingual newspaper outlet, that the proximity of Chinese and Russian liquor cultures is one of the reasons the group had a particular interest in the Russian market.

During the dialogue, Mr. Li noted that given that we operate in a world that has become an interconnected global economy characterized by integrated development, it behooves the world's liquor makers in setting up their development roadmaps, to take advantage of the opportunities that are making themselves available as a result of the One Belt, One Road initiative. He also mentioned how he is constantly thinking about the best way to carry out a globalization drive for Chinese baijiu around "policy coordination, harmonization of standards and cultural integration", giving the world an opportunity to appreciate the quality of made-in-China goods and to share the pure quality of Fenjiu, while facilitating global partnerships and innovation in liquor products. He looks forward to the efforts culminating in the joint building of a community where the world's liquor producers recognize their shared destiny and work together for a better future while demonstrating to the world the great value in the passing down from generation to generation of a strict adherence to quality in combination with the cultural resonance that is part and parcel of the liquor industry.

At the cultural exchange event, "Let the World Appreciate the Quality of China", Mr. Li sent a bottle of Xu Bing Art Edition Fenjiu to Russia's deputy minister of culture Oleg Ryzhkov. Ryzhkov said this precious bottle of liquor is not only being given to him, but to the Russian people. He appreciated the hand of friendship the Fenjiu Group has extended to Russia, and expressed the hope that the exchanges and cooperation between China and Russia would become even more fruitful. 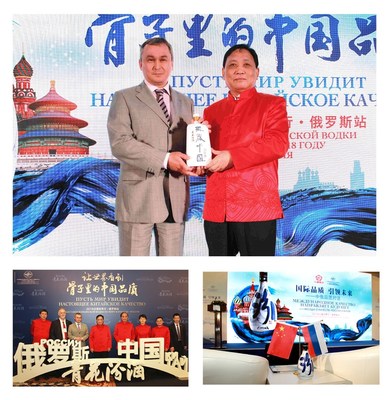