SHANGHAI, March 22, 2018 /PRNewswire/ -- US venture capital tracker Pitchbook announced 57 startups who have passed the unicorn threshold and attained $1 billion-plus valuation in 2017. 18 was born in China, covering industries from news feed algorithms, bicycle-sharing, to hardware producers. DotC United Group, a problem solver of globalization complexities, made the only Chinese unicorn in this field. 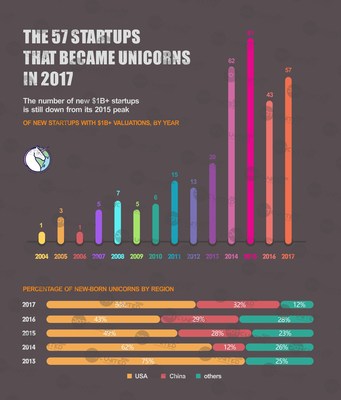 The 57 startups that became unicorns in 2017

The number of new-born unicorns in China spiked in the last five years. In 2013, U.S. dominated with a 75% share whereas China delivered a zero on its transcript. In 2017, China contains 32% share, losing to the U.S. with only a narrow margin. Pitchbook data also suggests that Chinese unicorns today in average receive higher initial valuations compared to the ones in the U.S.

The rapid growth of unicorns like DotC United Group is largely thanks to the expansion of Chinese tech companies and a drop of internet population growth amid recent economic slowdown in China. With lower "internet dividend" for most Chinese companies, seeking opportunities in global marketplace becomes inevitable.

In 2014, China's State Council issued a statement vowing to promote outbound investments by Chinese firms. In first half of 2016, Chinese private companies completed 290 mergers and acquisitions (M&A) overseas, accounting for 64% of the total M&A deals by all corporations, and the number is on the rise.

As a solution provider for globalization complexities, DotC United Group now has helped hundreds and thousands of partners, mostly small and middle level enterprises, to achieve their global ambition and technological advance through advertising, BI/data analytics, and APP metrics platforms.

Through years of localization experience, data-driven solutions, and diversified channels, DotC United Group was able to simplify the CTW (China to World) process through structured and systematic planning and execution. Analysts from Pitchbook speak highly of the potential of Chinese companies abroad. As long as China continues to grow with its economy and expand overseas, the filed of "globalization solutions" contains limitless opportunities and adventures.

In 2018, several mega-funded Chinese tech unicorns, including smart phone and electronics maker Xiaomi and Chinese Netflix Aiqiyi, may be angling to go public with multibillion-dollar offerings. Meanwhile, Bytedance continues to expand its news and engineering divisions overseas. According to Pitchbook analysis, unicorns will continue to serve as the driving force of China's economy and generate more opportunities worldwide.