Football boys from all over the world play together in Shenyang

SHENYANG, China, Aug. 10, 2018 /PRNewswire/ -- The fourth "Peace Cup" International Juvenile Football Tournament hosted by Shenyang municipal government kicked off on August 5. The event gathered 202 teams from 13 countries and regions with more than 4,000 young friends of different colors and languages in Shenyang to share the charm and joy of football. 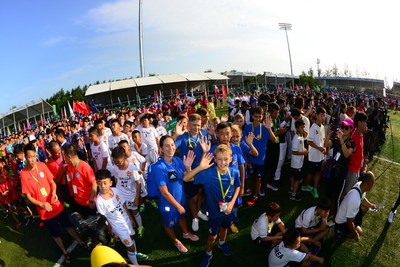 Football is universally acknowledged as the "first sport". The development of juvenile football is the basic project to achieve China's football dream and build a strong country in sports. In these years, Shenyang municipal government has attached great importance to the development of football. To actively support the popularization and improvement of the football sport, the "Peace Cup" -- an international juvenile football brand competition has been elaborately created. After several years of cultivation and development, the "Peace Cup" has become a bridge to spread the football culture and promote civil diplomacy.