Gig - the shadow economy that's taking over the world 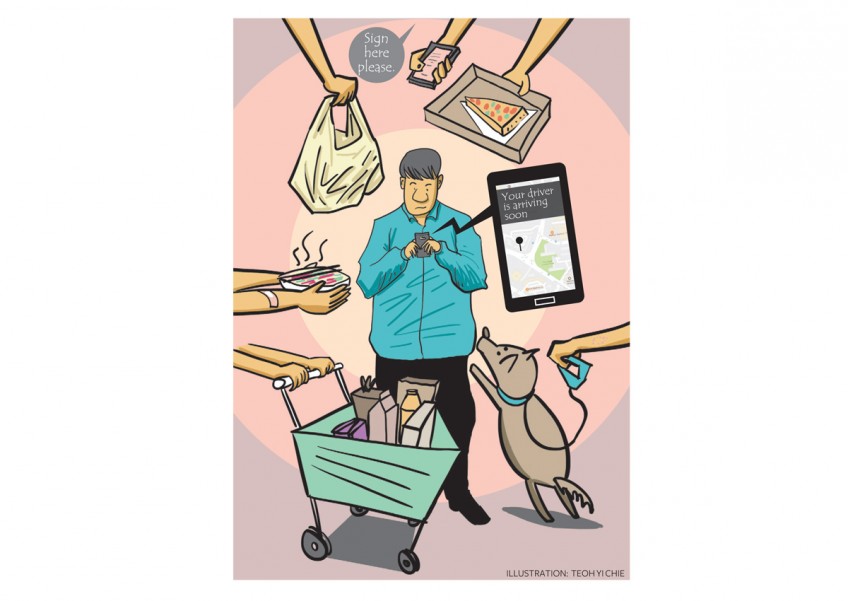 So you work in the CBD.

Here's your day: You book a Grab car to get to work; as you leave the apartment, the dog walker shows up to take your beagle for a run and a bath.

You're rushing a presentation for a new client and chow down a sandwich at your desk, brought to your office by foodpanda.

The client, a tech entrepreneur who's started an online sales portal, calls to ask you to meet at Starbucks because he needs a chai macha latte.

You talk him through the presentation at a communal table shared with a young lady in a hoodie, engrossed in her headphones and laptop - she's a Web design freelancer.

When the day comes to an end, you jump into the backseat of a Mitsubishi Attrage that's driven by a man you've not met before and already occupied by another backseat passenger.

This earns a quizzical look from your watching boss - he's not familiar with uberPool.

You arrive home in time to receive delivery of the groceries you ordered online from RedMart.

You've just spent your entire day in the midst of the burgeoning gig economy.

Mention the "gig economy" to someone over 50, and there's a good chance you'll encounter a blank stare.

In the old economy, the world was divided into business owners and employees who worked regular hours, received a monthly paycheck, could count on employee benefits, took annual and medical leave, and eventually retired with their pension or Central Provident Fund (CPF) nest egg.

Today's economy is fast morphing into a market with totally new rules and players.

The gig economy really started to gain traction during the global financial crisis when out-of-work individuals made ends meet by "gigging" (ie taking on one or more part-time jobs).

The Internet opened up more possibilities for individuals to be their own bosses - whether you were a teenager supplementing your allowance by trading the latest cult sneakers on online marketplace Carousell, a retiree doing odd jobs for harried professionals, or a freelance journalist preferring to work in your pyjamas from home.

It's an economy that's growing by leaps and bounds.

The NTUC (National Trades Union Congress) Budget Recommendations estimate that there are around 200,000 freelancers or gig workers in Singapore, about 10 per cent of the adult workforce.

As high as that number sounds, Singapore actually lags behind the EU-15 and the US, where a 2016 McKinsey report puts the percentage of independent workers at close to a third of working adults, while a Forbes report puts the US numbers even higher than that.

The McKinsey report incidentally also dispels the myth that freelancers are predominantly young millennials, finding that more than three-quarters of independent workers are over the age of 25.

And China isn't far behind either - there are 20 million monthly active users on DouMi, a start-up focusing exclusively on part-time positions, while almost half of Chinese college students polled in 2016 said that they did not want to enter the traditional labour market.

So what's wrong with that?

At first blush, the gig economy seems attractive - a deregulated employment system providing work-life flexibility, "surge-pricing" allowing the value of services to be set by demand (brought into prominence by Uber, with even regular cab companies now set to follow suit) and maximum convenience for consumers - what could be better?

Consider this: Lim Seng Hock was retrenched from his offshore marine job at 50 but still has children in secondary school.

His wife is a homemaker.

He's been making ends meet as a Grab driver, but an accident has laid him up for three months.

During this time, because drivers on the ride-sharing app are considered self-employed, he has no income or company insurance and has to lean on government support and seek bursaries for his children - and that's not even counting his own medical treatment.

If the workers of this shadow economy will ultimately make up 20-30 per cent of our workforce as they do in the West, that would represent a very significant proportion of individuals who will not have the protection of traditional safety nets provided by employers and company insurers.

Importantly, many of these workers also lose out on CPF contributions from their employers.

What does that all add up to?

With no annual or medical/hospitalisation leave (adding up to 74 days for an equivalent Employment Act employee) and no 17 per cent employer CPF contributions, his accident on top of his lack of leave and CPF means he will have effectively lost out on close to 40 per cent, or S$10,000, of the amount he might have earned had he been a regular employee on a S$2,000 salary.

And that's not even counting what he's already lost out on by lacking insurance cover and various other basic employment rights.

Let's also not forget he's been needing to pay for his own car insurance all this while too - regular taxi drivers don't have to.

It is a problem that Singapore is looking into at the highest levels.

As Deputy Prime Minister Tharman Shanmugaratnam said at the McKinsey Innovation Forum in October 2016, hiring contract workers "serves the interest of the company because they're really pushing risk onto the contract worker and I don't think that's a great social model".

Labour chief Chan Chun Sing stated in January that the labour movement, the government and employers are studying what long-term implications these gig economy and freelancer trends will have on Singaporeans during their working and retirement years.

In line with this, the Labour Movement's Budget recommendations contained proposals that gig workers be protected under labour laws and be given access to the Tripartite Alliance for Dispute Management (TADM, a mediation precursor to the ECT). Manpower Minister Lim Swee Say also said in February that his ministry was studying the issue.

While it's well and good, one couldn't help but notice that freelancers weren't touched on at all when Finance Minister Heng Swee Keat delivered the Budget recently.

Time for the law to lead the way

Even as Parliament continues to debate and study what can be done, perhaps a first, and important, step meanwhile is to decide on a fair legal classification of gig workers in our new economy.

Traditional binary divisions of employees and independent contractors may no longer be meaningful.

This is in fact the position that the UK looks to have taken. In October last year, a UK employment tribunal held that among other things, due to the amount of control Uber exerted over its drivers, they should be classified as "workers" (rather than just self-employed), and therefore be entitled to holiday and sick pay, paid rest breaks, and the national minimum wage.

"The notion that Uber in London is a mosaic of 30,000 small businesses linked by a common 'platform' is to our minds faintly ridiculous," wrote the judge in the ruling, going on to say that any organisation that resorted in "its documentation to fictions, twisted language and even brand new terminology, merits, we think, a degree of scepticism".

This was swiftly followed by a similar ruling, also in the UK, that bicycle couriers with City Sprint should be classified as workers.

That came in a judgment where the company's contractual arrangements were quite scathingly described as "contorted" and "window dressing".

While both the Uber and City Sprint cases are under appeal, the appeals may not change anything. In February, the UK Court of Appeal rejected an appeal by Pimlico Plumbers, ruling that its "self-employed" plumbers did indeed qualify as workers.

The case, the highest UK court ruling to date on the gig economy, had observers noting that the courts are alive to the inequality of bargaining power faced by such workers.

The decision came even as the UK government released a report warning that "unscrupulous" employers were in a position to exploit low-paid and low-skilled workers.

It is time Singapore takes a long hard look at its own legal and regulatory classifications.

With over-65s forming an ever-increasing proportion of our population, our government's social safety nets are already having to be spread wider and wider.

If fast-growing numbers of gig economy workers now have to be catered to from those exact same resources without any additional contribution from corporations, they will soon be spread too thin.

The gig economy is here to stay; now let's do right by its workers.

This article was first published on March 13, 2017.
Get The Business Times for more stories.