TAIPEI, Sept. 27, 2022 /PRNewswire/ -- GIGABYTE is proud to launch its brand new X670E and X670 series motherboards, which support AMD's recently announced Ryzen™ 7000 series desktop processors based on the next-gen Zen 4 architecture. GIGABYTE's latest AM5 platform offerings are topped by the gaming-focused AORUS lineup, covering both segments of the flagship X670E and the high-end X670 chipsets. In addition to natively supporting the next-gen PCIe 5.0 slot and M.2 socket, as well as the DDR5 memory, the new AORUS X670 motherboards are all about big performance and system stability, with direct digital power and advanced thermal solutions. At the same time, these boards are designed with user-friendliness in mind, featuring PCIe and M.2 EZ-Latch design to make component swapping a whole lot easier. 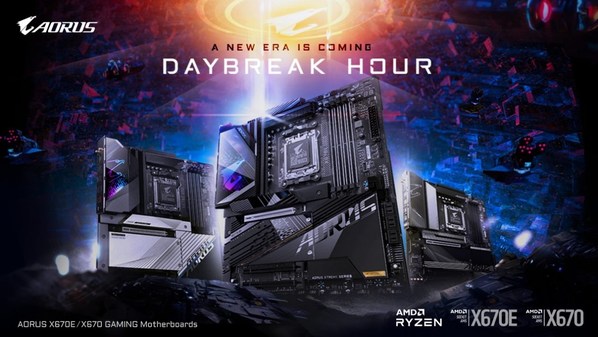 The X670E AORUS XTREME leads the way with an 18+2+2 direct digital power, which effectively improves system stability for unlocking the full potential of the new Ryzen™ 7000 series processors. To enhance the overall heat dissipation under overclocking and full-speed operation, GIGABYTE X670E and X670 motherboards are stacked with advanced thermal designs, such as the 8mm Mega-Heatpipe, the full-coveraged VRM heatsinks, and the M.2 Thermal Guard III heatsinks on the storage devices, so that the next-gen gaming performance and transmission speed can be fully unleashed on the new platform. The newly incorporated EZ-Latch Plus design on the X670E and EZ-Latch on the X670 motherboards streamline the PC building process by simplifying the graphics card removal with only an effortless push of a bottom and making M.2 SSD installation easier than ever without the use of a single screw.