SHENZHEN, China, Sept. 22, 2017 /PRNewswire/ -- Hainan Airlines announced the launch of direct air service between Shenzhen and Brisbane during the grand inauguration ceremony held at Shenzhen Bao'an International Airport on September 20, 2017. The maiden flight of Hainan Airlines HU411, which took off from Shenzhen Bao'an International Airport at 10:35 pm on September 20, 2017 Beijing time, landed at Brisbane Airport at 9:30 am on September 21, 2017 local time. The roll-out of the new service will not only further expand the Chinese airline's international route network but also provide passengers travelling between China and Australia with more travel options. 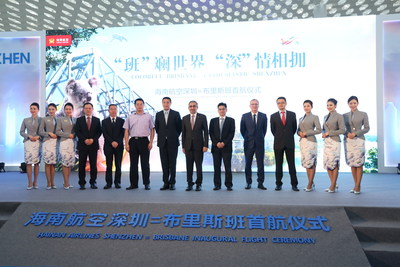 Brisbane, also known as "the City of Sunshine", is the capital of Queensland, a state in northeast Australia. The launch of the direct service between Shenzhen and Brisbane, two cities that established a sister city relationship in 1992, is expected to facilitate international trade between China and Australia and deepen cultural exchanges between the two countries in addition to promoting the development of the two cities' tourism sectors.

Hainan Airlines has been named a SKYTRAX five-star airline for seven consecutive years. The airline also has one of the world's best safety records in that it has not had a major accident in its 24 years of operation, and it was ranked third in airline safety in 2016 by JACDEC, a German airline safety data evaluation firm. With the new service, Hainan Airlines will provide comfortable and safe flying experiences to passengers travelling between China and Australia.