BEIJING, March 15, 2018 /PRNewswire/ -- Today. Hainan Airlines, a unit of HNA Group and mainland China's only Skytrax Five-Star airline, held a press conference at the Irish Embassy in Beijing, announcing the launch of new direct flight services between Beijing, Dublin and Edinburgh, scheduled to start on June 12. The routes, which are the first direct flights offered from Beijing to Dublin and Edinburgh, will be serviced by an Airbus A330 wide-body aircraft on every Tuesday, Thursday, Saturday, and Sunday. 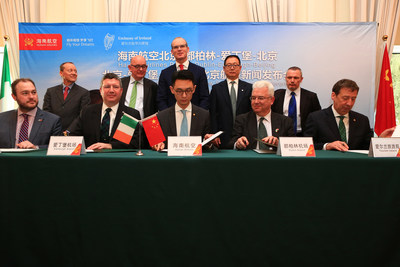 At a ceremony at the Irish Embassy in Beijing, Hainan Airlines signed cooperation agreements with the Dublin Airport, the Edinburgh Airport, Tourism Ireland and VisitScotland, seeking to play a leading role in deepening economic and cultural ties between China, Ireland and Scotland.

The Irish Deputy Prime Minister, Simon Coveney said, "I'm pleased to see that Hainan Airlines will launch the first non-stop service between Beijing and Dublin, providing the convenience of a direct route between the two countries for tourists, students studying abroad and business travellers going to China and Ireland. The new service will go a long way in promoting bilateral relations between the two countries, and further enhance the connection between Dublin and Edinburgh."

The Hainan Airlines chairman, Mr. Bao said, "As a trusted brand and a five-star airline, Hainan Airlines, is guided by its mission of creating a better life for people. The launch of the Beijing-Dublin-Edinburgh route will not only provide convenience for tourists, but also promote multilateral cultural integration, helping to boost the economies of China, Britain and Ireland."

HNA Group is a global Fortune 500 company focused on aviation, tourism, logistics and financial services with significant operations globally. Since its founding in 1993, HNA Group has evolved from a regional airline based on Hainan Island in southern China into a global company with over $145 billion of assets and over $100 billion in annual revenues based on 2017 figures, primarily across America, Europe and Asia. HNA's tourism business is a fast-growing, vertically-integrated global player with market-leading positions in aviation, hotels and travel services. HNA's Logistics business is a leader in logistics and supply chain management with capabilities in shipping and equipment manufacturing, maritime transportation, third-party payment platforms and project finance. In financial services, HNA is China's largest non-bank leasing company, and a leading provider of a diverse set of businesses in equipment leasing, insurance, asset management, investment banking and credit services. For more information, visit www.hnagroup.com

Founded in January 1993, Hainan Airlines Holding Co., Ltd, a unit of HNA Group, has become one of the three safest airlines worldwide, and one of the nine airlines in the world to be rated Five Star Award by Skytrax. We are devoted to providing passengers with comprehensive flight services. Hainan Airlines' fleet is mainly composed of Boeing 737 and 787 series aircraft and the Airbus 330. Please log on the Hainan Airlines website (www.hainanairlines.com) for more information.