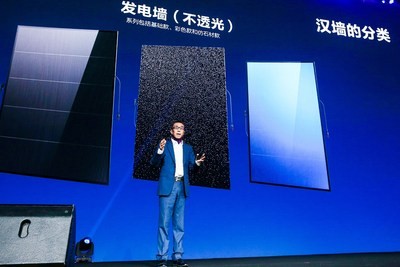 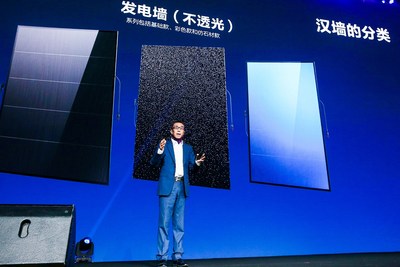 HanWall is Hanergy's newest development in the building-integrated PV segment, going well beyond simple installation of rooftop solar panels and making power generating capability an integral part of the fabric of a building.

Equipped with CIGS solar cell technology, every 1000 square meters of HanWall incorporated in the south facade of a building in Beijing can generate 326 kW of electricity per day. As of today, over 700 patent applications have been filed for HanWall. Quality certifications including China Compulsory Certification have been issued or are in the process of being approved by authorities from China and 6 other countries and regions.

Emphasizing the many benefits of HanWall at the global launch event, Hanergy assured its potential clientele of HanWall's abiding power generation, guaranteeing no less than 85 percent output for 25 years. With the launch of this next-generation BIPV module and solution, Hanergy sets the standard for future ecological buildings and ups the ante in the BIPV segment.

During the global launch, Hanergy also kick-started a new initiative, "100 New Eco Landmarks". As part of this initiative, Hanergy will cooperate with USGBC (U.S. Green Building Council) to jointly promote the concept of eco-buildings.

Subsequently, Hanergy will partner with famous architects, KOLs and LEED (Leadership in Energy and Environmental Design) consultants to form a commission, LEED Green Building and Renewable Energy Commission, to identify buildings which either have the LEED certification or are applying for it, to propose the benefits of using BIPV products like HanWall and to provide selected buildings with HanWall solutions for free or at a discounted price.

Not only does HanWall hold par-excellence capabilities to light-up buildings with its unique design, but it also has boundless environmental benefits. 1000 square meters of installed HanWall is the equivalent to reducing coal burning by 48 tons or planting 6000 trees.

"Once buildings can be designed in such a way that they are completely autonomous, completely free from grid ties, designed efficiently using future technologies and sustaining themselves using only natural resources, then they truly become a building for the future. For me, BIPV is an integral part of the future of architecture and HanWall represents a new dawn for BIPV across the globe."

Paul's name is renowned in the industry. He's worked on some of the industry's most prestigious facade projects, like Tower 42, Swiss Re (also known as the Gherkin) in London, and Terminal 5 at London Heathrow airport.

As the entire world has reached a consensus on the increased use of clean energy as a solution to global warming, Hanergy is a staunch believer of corporate environmental responsibility. Through its revolutionary and pioneering solar products, such as HanWall, HanTile, Humbrella, and HanPack, the company is showing its devotion to empowering the world with clean energy.

Hanergy Thin Film Power Group Ltd (0566.HK) is a Hong Kong-listed company, and a subsidiary of Hanergy Holding Group Ltd. As one of the leading thin-film solar companies in the world, Hanergy Thin Film Power Group Ltd is committed to "Building Mobile Energy". Since 2009, Hanergy has been working relentlessly to integrate worldwide solar technologies, and making a robust investment in research and innovation in the field of thin-film solar power. Thin film solar technologies have been applied to a series of commercial and non-commercial products, including HanTile, HanWall, HanCar, HanWindow, Humbrella, HanPack and HanPaper.