BEIJING, March 6, 2019 /PRNewswire/ -- Hanggai Band has been seeking more possibilities and music diversity since their successful 2018 album "Homeland". Their newly completed recording, "Big Band Brass", featuring an American jazz brass band is the answer. It is a mind-blowing cooperation - the first of its kind in China - and Hanggai wishes to bring an unforgettable audio journey to music lovers. The songs from the new album will be the major part of Hanggai's tours and concerts in 2019. The 2019 new album is released by Beijing TaiHe Musician Culture and Art Co., Ltd. 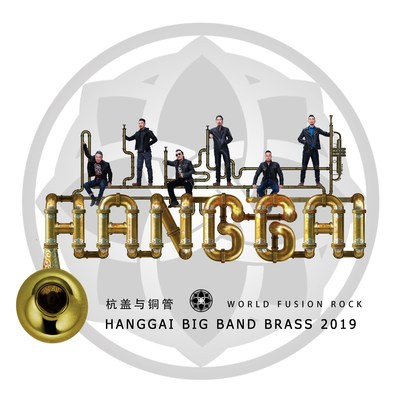 The trail-blazing album is produced by legendary Canadian music producer Garth Richardson. It is the second time that he worked with Hanggai since the "Horse of Colors." He is the man behind Rage Against the Machine's debut album and the Red Hot Chili Pepper's "Mother's Milk". Garth has also worked with many young artists and made their first albums gold (500,000 copies sold) and platinum records (1 million copies sold). His name is also on the CD covers of Hedley, Alice Cooper and Taylor Swift.

Hanggai selected some of their favorite songs from their previous albums and rearranged them. A Chinese symphony music composer wrote the brass band score. The band spent 20 days in two studios in Canada and then flew to the United States. The jazz brass band part was recorded at the United Studio in Hollywood, L.A.

The New Year Concert at the Great Hall of the People in Beijing at the end of 2015 was a remarkable crossover in the history of Chinese music. The musical feast was jointly presented by world-renowned composer and conductor Tan Dun and Hanggai. In Tan Dun's eyes, Hanggai is a band with "unique musical language, soul and pioneering spirits." So far, Tan and Hanggai have jointly staged four "Symphony·Rock" concerts and have won wide acclaim. Inspired from the cooperation with Tan Dun and the symphony orchestras, Hanggai has made a world fusion rock album. A 13-man jazz brass band has brought a powerful impact to Hanggai's music, and has largely expanded the imaginations of their music. Composer Bi Jianbo has blended classical, jazz and new age into his score for the brass band including the hustle and bustle of downtown New York and the wind blowing through the Gobi Road. Hanggai is trying to establish a new form of dialogue between eastern and western music. The new album is a bold adventure, a courageous breakthrough, and a showcase of Hanggai's extraordinary mastery of music.

Hanggai Band was founded by Ilchi in 2004, and the members come from Inner Mongolia, Qinghai and other provinces of north China. Hanggai has presented more than 500 performances in more than 60 countries and regions on 6 continents. It is the most coveted Chinese band on the international music scene.

In the past 15 years, Hanggai has performed at the Lincoln Center and Kennedy Center in the United States and the Royal Grand Theater in London, UK. They have been invited to perform at the top-level international music festivals including the Sziget Festival (Hungary), Roskilde Festival (Denmark), Wacken Open Air (Germany), Fuji Rock (Japan), Bonnaroo Music & Arts Festival (US), the Lowlands Festival (the Netherlands), Woodford Folk Festival (Australia), Ollinkan Festival (Mexico), and the international arts festival WOMAD in England, Australia, New Zealand, Abu Dhabi, Spain, Italy and Chile.

In 2015, Hanggai were the national champion of China Central Television's original music program "Sing My Song", helping them find a wider audience.

In 2008, their debut album "Introducing Hanggai" received unanimous praise from the international media. The most trusted music citric website Pitchfork scored the album with a rare 8.0 points and credit. Rhapsody commented on the album saying, "Built from—and meant for—Mongolia's wide open spaces, this music will make you homesick for a place you've never been."