Hangzhou is Building the Top City of China's Digital Economy

HANGZHOU, China, Oct. 22, 2018 /PRNewswire/ -- On October 11th, a conference was held in Hangzhou, the eastern city of China, to build Hangzhou into the "Top City of China's Digital Economy", according to the Information Office of Hangzhou Municipal People's Government, which provided media support at the event. As a city with Alibaba and other Chinese Internet giants, Zhou Jiangyong, the mayor of Hangzhou, mentioned at the conference that the goal of building Hangzhou into the top city in China's digital economy is based on Hangzhou's competitive advantage. He said that, compared with other cities such as Shanghai, Guangzhou, Shenzhen, Hangzhou is more qualified to become the city with the highest level of intensification of China's digital economy. 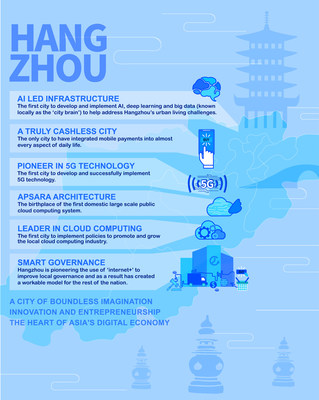 The current situation and outlook of Hangzhou digital economy

Jack Ma, founder of Alibaba Group who was born in Hangzhou, is proud of the city's digital lifestyle. He said at the conference that in Hangzhou, taking subway or buying tea eggs can be paid by mobile phone. You can also withdrawal your provident fund by using face recognition technology. According to Jack Ma, being the top city in the national digital economy process is not only about wealth and economic development, but also relies on civilization, governance and security. "Digitization will not create cracks, technologies will make the city a better place," he said.

The White Paper of Digital Economy Index of Chinese Cities released in March this year showed that Hangzhou is ranked in the leading category and among the top in terms of data & information infrastructure, city services, city governance and industrial integration.

Driven by digital economy, Hangzhou has formed advantageous industries such as information software, E-commerce, cloud computing big data, and digital content, with more than 20 leading enterprises such as Alibaba, NetEase and Hikvision emerging prominently; has given birth to the Yunqi cloud town and other characteristic towns; and has gathered scientific research institutions like WestLake University, Zhijiang Lab, Alibaba DAMO Academy, etc.

Nowadays, Hangzhou is becoming increasingly popular among young Chinese people and foreign entrepreneurs. Statistically, the net inflow rate of Internet engineers, the talents and the overseas returnees of Hangzhou are all ranked first in China in 2017, and Hangzhou was selected into the "the Most Attractive Top Ten Chinese Cities for Foreigners" for eight consecutive years.

In terms of urban services, Hangzhou is striving to build a "Mobile City". The "Hangzhou business service" application, which launched in May this year, has been able to handle 153 different kinds of affairs.

Besides, the "city brain" urban management platform based on big data, cloud computing and artificial intelligence, which was born in Hangzhou, has begun to promote in Hangzhou and even outside of China. In January, Kuala Lumpur in Malaysia introduced a scheme to give special vehicles priority from Hangzhou's "City Brain", with tests showing that the time for ambulances to arrive at the scene was cut by 48.9%. In the future, "Hangzhou traffic light" may become a new traffic light control system in the world.