HANGZHOU, China, Oct. 18, 2017 /PRNewswire/ -- Following the success of the G20 Hangzhou summit, Xiaoshan, formerly a city in its own right and, today, a thriving district of the city of Hangzhou separated by the Qiantang River from Hangzhou proper, has, as a result of a series of marketing and public relations efforts, begun to receive attention from global tourism organizations. The district's tourism industry, has "come from behind", to, in short order, transform itself into a modern international city worthy of its own distinct reputation. The district took these important steps during the transitional period between Hangzhou's hosting of the G20 summit last year and the upcoming Asian Games in 2022, paving the way for the district to take its own place on the international stage.

On the afternoon of September 19, Xiaoshan held a conference at which the district announced the roll out of a campaign to collect suggestions for the tourism brand's slogan. The event, hosted by the Hangzhou Xiaoshan District Committee and the Xiaoshan Government, organized by the Xiaoshan Tourism Bureau and co-organized by Zhejiang Daily Press Group's Travel Media Center, took place along the bank of Xianghu Lake. The campaign aims to kick off a new round of efforts to build the Xiaoshan tourism brand and invite the district's local residents to actively engage in coming up with ideas for a catchy slogan that will draw the attention of international audiences.

As early as 2009, the Xiaoshan Tourism Bureau rolled out a slogan, which, translated from the Chinese, read: "East China's living room and home of the new leisure paradise". The district already boasted many tourist attractions as well as abundant resources for the hosting of conventions and exhibitions, among them, the elegantly-designed International Expo Centre and the graceful Olympic Sports Center, complemented by the natural beauty of the tranquil yet wildlife-rich Xianghu Lake, the snow-capped mountains that surround the area, and the awe-inspiring majesty of the famous Qiantang Tide.

Following the first anniversary of G20 Hangzhou Summit, the government officials in charge of developing Xiaoshan district's tourism sector became aware of the opportunity that was presented by Hangzhou's hosting in succession over a relatively short period of time of two major international events and seized on that opportunity, which is being referred to locally as the "post-summit, pre-Asian Games" period, to rapidly grow its convention tourism sector. Since opening last year, the International Expo Centre has held 1,100 conventions and 24 large exhibitions. The tourism bureau has invested 50 million yuan (approx. US$7.5 million) in expanding the convention and exhibition industry, laying a solid foundation for creating an international convention and exhibition tourism cluster. Following an evaluation of the success of the expo center, the district rolled out a plan to develop the surrounding area, naming it Qianjiang Century City, with the expo center serving as the core. The plan calls for the addition of 120,000 square meters of convention space to the area in the future. 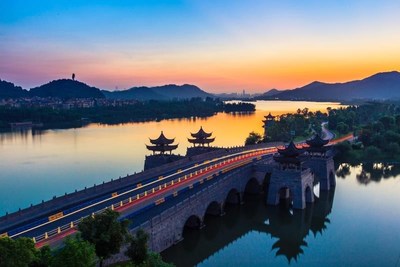 The district invested 250 million yuan (approx. US$37.5 million) in select projects to be placed in the immediate proximity of Xianghu Holiday Resort, with the first projects a JW Marriott as well as an amusement park, the Kaiyuan Forest Park and Water Sports Center, the construction of which started during the first half of this year. The park will combine elements that highlight the characteristics of the ancient town of Xiaoshan along with known tourism draws, building on and further enriching rather than simply replacing the "citizen's park" currently at the same location. The construction of a theme-based art museum, boutique hotel, a series of streets and lanes designed for a leisurely stroll as well as the replication of the ancient town have been completed.

Yu Jianxin, director and party secretary of the Xiaoshan Tourism Bureau, said, by way of introduction, "Xiaoshan's tourism industry plans to achieve international development through the International Expo Centre, the replication of the ancient town and build out of the Xianghu Holiday Resort, creating an all-encompassing tourism destination that will have something to offer every category of tourist. The district is accelerating its efforts to transform itself into a modern international city. Taking advantage of the opportunity offered by Hangzhou's hosting of two global events, the G20 and the Asian Games, within the space of a few years, we clearly see that our roadmap for the development of Xiaoshan's tourism sector will be one that will break the mold and provide the path for us to take our rightful place on the wider international stage. "

Xiaoshan rolls out the campaign to collect suggestions for the district's promotional slogan.  A reward awaits the lucky individual whose submitted suggestion becomes the one that is ultimately selected.

A tourism slogan can help visitors know and define a city or district. The previous slogan, translated from the Chinese, reads "East China's living room and home of the new leisure paradise", and, in the same manner as a vivid floral skirt, demonstrated the hospitality and friendly spirit of its people combined with the relaxing atmosphere of the district, yet keeps in mind its thriving convention and exhibition industry. The district is now making its first appearance on the international stage and is ready to give gravitas to the first impression that has already been created. It is with this in mind that the district government of Xiaoshan in concert with the tourism bureau began to think about the creation of a new slogan to better define Xiaoshan and its future place in the tourism sector. 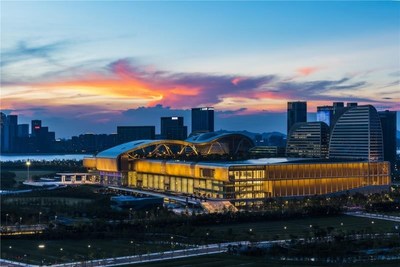 This slogan campaign runs from September 20 through October 20. The slogan must be 12 words or less (in English or in Chinese, excluding punctuation), be catchy and reflect Xiaoshan's rich cultural history, wide range and variety of tourist attractions, resources for conventions and exhibitions as well as the district's burgeoning cosmopolitanism. Participants can send their suggested slogans to xiaoshanzjol@163.comand, including the author's name followed by "Xiaoshan slogan campaign" in the subject line with the suggestion and the author's phone number in the text portion of the email.

Wuhan virus: Man on Scoot flight from Singapore to China sent for further tests, all passengers isolated
Internet laughs at antics of inattentive woman who got knocked down by carpark gantry arm
Andie Chen says ang bao 'married rule' is silly - how much do celebs spend on ang baos?
'Better safe than sorry': Actress Eswari stays healthy not just for herself
What to eat on the 1st and 2nd day of CNY that's not hotpot, McDonald's, KFC or Malay food
Things I wish I knew before I left my high-paying job
Singapore hospital warns against eating hotpot more than once a month, seafood and chicken broths among least healthy
Local celebs dish on the worst questions relatives ask on Chinese New Year
Things to do this CNY weekend in Singapore that's not eating, visiting or collecting ang baos
Singapore influencers Xiaxue, Pxdkitty go head to head in battle of the magnetic lashes
7 fun party games to play on your phones during Chinese New Year gatherings
Two fires break out on first morning of Chinese New Year