HANGZHOU, China, June 7, 2018 /PRNewswire/ -- Hangzhou Tourism Commission will stage a cultural festival to salute its fans for their support in New York, celebrating the 5th anniversary of Hangzhou's commitment to promoting its rich tourism resources. 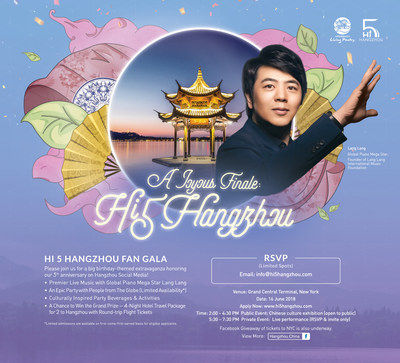 Hangzhou Tourism Commission released an advertorial on The New York Times to accompany the Gala.

The festival dubbed 'Hi 5 Hangzhou Fan Gala' will take place in New York City's Grand Central Terminal's Vanderbilt Hall at 2:00 pm ET on June 16, 2018. The gala, culminating a series of celebration activities organized by the Commission, consists of two sessions  -- an open-to-public cultural exhibition from 2:00 to 4:30 PM ET and a private performance show for RSVP guests from 5:30 to 7:30 PM ET.

Prominent Chinese pianist Lang Lang, one of the most prolific Hangzhou Facebook fan, also known as the Grand Canal Hangzhou Ambassador, is invited to play a piano concerto of traditional Hangzhou music during the private session. "I'm excited to join the gala and give my performance to NYC residents.", said Lang Lang, the representative among thousands of Hangzhou's fans, "I have always been charmed and inspired by the breathtaking scenery of Hangzhou, to be able to share my love for the picturesque city of Hangzhou with my music is without a doubt an honour. "

During the event, there will be four interactive displaying zones in the Vanderbilt Hall, to create a traditional and fashionable Chinese vibe. Featuring Hangzhou rich heritage such as tea, silk, and folding fans, as well as the use of VR tools to draw the Hangzhou City based on their imagination. Western-style music and dancing performances will also be performed to juice up the party.

As home to countless Chinese cultural treasures and the headquarter of Alibaba group and several tech firms. Hangzhou masterfully blends the traditional and the modern Chinese experience through major social media platforms including Facebook (facebook.com/Hangzhou.China), Twitter (twitter.com/hangzhou_china) and Instagram (instagram.com/hangzhou_china) during the 5-year period.

Register online through official website https://www.hi5hangzhou.com for limited 300 complimentary tickets. Attendees of the gala will have the chance to win 2 round-trip tickets to Hangzhou with a 4-night hotel stay.