SEOUL, South Korea, March 27, 2018 /PRNewswire/ -- "Hanmi's innovation journey that began with RFID has reached its final destination with a Smart Plant. We spent 150 billion won on the plant, creating a 'one-stop' infrastructure from research and development (R&D) to manufacturing and distribution. This would lead the Fourth Industrial Revolution in the pharmaceutical industry. Our global CDMO (contract development and manufacturing organization) business will get into full swing at the plant, giving Hanmi another opportunity to bolster its international presence." (Hanmi Pharm CEO Woo Jong-soo) 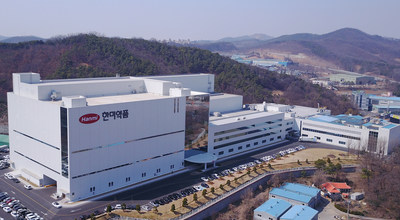 Hanmi is set to make a second leap with the Smart Paltan Plant in Hwaseong, Gyeonggi Province.

The company will invest 18 percent of its sales, or around 170.7 billion won, in R&D this year to create a virtuous cycle in which good sales boosts R&D and boosted R&D pushes up sales. The Paltan Plant, which produces the firm's major products, will play a critical role.

Hanmi's innovation journey began with the RFID-based manufacturing system in 2009. RFID technology made it possible to monitor inventory, production speed, patterns of use and others on a real-time basis.

This enabled the company to accumulate big data on everything from procurement to manufacturing, to distribution and to sales. The data was also used to formulate best practices to produce best-quality products as quickly as possible.

Unlike the 2D barcode-based technology that can only check basic quantitative information, RFID can track everything from production history to distribution and the shelf life of products, to name a few. Therefore, the combination of RFID-based big data and IT-based smart plant is expected to be at the forefront of innovation in the pharmaceutical industry.

The Smart Plant is near to Hanmi's R&D lab. This proximity is expected to give Hanmi a competitive edge in promoting Contract Development and Manufacturing Organization (CDMO) business. Unlike CMO (contract manufacturing organization), a business model under which a company only produces products on a contract basis, CDMO provides comprehensive services ranging from R&D to development and manufacturing.

To become CDMO, Hanmi has introduced R&D and manufacturing facilities that meet global standards. At the same time, the company applied information technology to the facilities in a proactive step for the Fourth Industrial Revolution.

It was not just an automation of processes, but a fundamental transformation of a system powered by accumulated big data. The transformation played an important role in promoting the Paltan Plant's prowess internationally.

Now Hanmi's innovative drugs produced at the plant -- such as Amosartan, Rovelito and Rosuzet -- are distributed globally via international drug makers such as MSD and Sanofi.

On top of this, Hanmi is a certified drug maker whose production and quality management standards meet the standards of major European countries. The company is exporting finished products to the U.S. and Japan. Hanmi's anti-thrombotic drug Pidogul, manufactured at the Paltan Plant, was Korea's first solid dosage to win the endorsement of the European Union's Good Manufacturing Practice (GMP). This was possible because of the plant's one-stop system in which R&D and production lie in one unit.

The Smart Plant (eight floors above-ground and a basement) was built last year on a 36,492 square meter site. It stands next to Hanmi's R&D center and manufacturing management center.

The plant has an independent tour route through which visitors can view the manufacturing process through large glass windows without the inconvenience of having to wear clean protective clothing such as footwear, or having to wash their hands before entering.

The plant was designed by Japan's Kajima Construction and built by Samsung Engineering in compliance with the Current Good Manufacturing Practice (cGMP), a set of U.S. Food and Drug Administration regulations regarding the design, monitoring, control and maintenance of manufacturing processes and facilities.

The plant maximized its manufacturing efficiency with vertical placement of production lines, a departure from traditional horizontal placement.

The Smart Plant can produce various forms of drugs such as tablets (double layer, film-coated and uncoated), hard gelatin capsules and poly capsules. Production capacity is also flexible depending on the goal -- from a small amount for experimental drugs to mass production.

To minimize the risk of contamination, the plant adopted a "split valve" system and plans to introduce the state-of-the-art Consigma processing system. The Process Analytical Technology (PAT), which makes it possible to monitor the whole process in real time, is already in place and many processes have become automated.

"The Smart Plant will change the production paradigm of pharmaceutical industry and give Hanmi a competitive edge to lead the Fourth Industrial Revolution," said Hanmi CEO Woo Jong-soo. "We will offer top performance in CDMO with the plant, which will give us another opportunity to leap forward."

Q. Tell us about the parts of the smart plant into which you put your best efforts.

A. I made great efforts to expand the Smart Plant in a way that meets changes in the Fourth Industrial Revolution. Investment will continue to advance our manufacturing ability. We plan to expand our tour program so that people will have a better understanding about Hanmi and the pharmaceutical industry.

Q. Tell us about difficulties you faced while expanding the plant.

A. It took a lot of time and money to introduce and set up high-end systems and facilities. We studied Japanese cases of process automation and European cases of manufacturing advancement. Simply put, I would say the smart plant encapsulates Hanmi's accumulated technologies and knowhow.

Q. Tell us about the CDMO business you pursue.

A. The Smart Plant's competitive edge lies in its distinguished design and ability to produce drugs in compliance with the Current Good Manufacturing Practice (cGMP). These were already recognized by global pharmaceutical companies such as MSD, Lilly, Sanofi and Janssen. The CDMO business with these global companies will give a big boost to Hanmi's growth.

Q. What is your final goal?

A. Hanmi is leading the domestic pharmaceutical industry and sharpening its competitive edge to challenge global players. We are upgrading our manufacturing and management systems to meet global standards. The smart plant will play an important role in making Hanmi a global pharmaceutical company.