BEIJING, Oct. 16, 2018 /PRNewswire/ -- Harrow Beijing, an affiliation of Harrow School London (est. 1572), announced a new joint initiative for the cultivation of talent through footballing culture at a ceremony: strengthening their partnership with Anmin Schools and underlining their commitment to service and the nurturing of future leading talent. 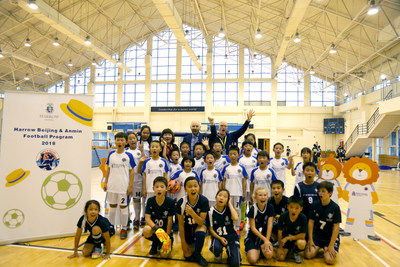 Since 2016, Harrow and Anmin Schools have worked to improve the prospects of young people in Beijing under the 'big brother', 'big sister' scheme. The new footballing initiative, supported by the British Chambers of Commerce and donations by Harrow Beijing's Churchill House, aims to expand this partnership further and deepen the relationship between the two schools and the wider community.

"Our partnership with Anmin began in 2016, with a fundraiser for the school conducted by Friends of Harrow. Since then, it has expanded several times to include a range of inclusive activities, including Cricket lessons by former England Captain Mark Gatting last year," said John Hopkins, Assistant Head Master – Communications, during the ceremony.

"It is vital as a school that we support the local community. Through this new footballing initiative, we aim to use the power of football to educate and empower not only our students but the local community as well. As one of the most powerful sports in the world, football has the unique ability to bring together people from all backgrounds for universal enjoyment and is a vehicle for academic and personal excellence," Mr. Martin Hylton, Master in Charge of Football, continued.

The new initiative, aimed at empowering local communities and providing an opportunity for older students of the school to develop their leadership qualities, is sponsored by the British Chamber of Commerce in China and will begin in mid-October. New equipment and kits for students of Anmin were provided by donations made by the Churchill House.

Anmin Schools were established in 2003, providing support, education and opportunities to the children of migrant workers. Currently, there are 10 schools under the Anmin scheme operating in Beijing providing education to 2,600 children.

Harrow Beijing, founded in 2005, enjoys a strong link with Harrow School London and with other Harrow International Schools in Bangkok, Hong Kong and Shanghai. Unifying the link is the educational expertise forged at Harrow School London over hundreds of years, and in the core mission -- Leadership for a better world.