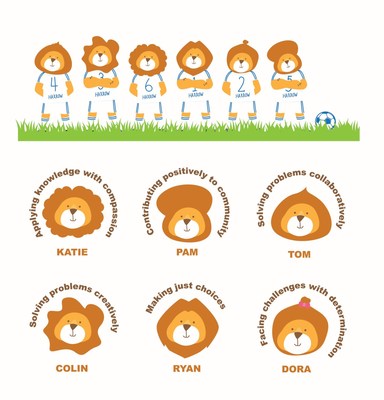 "Being 'educated' in today's global context requires much more than just good examination results," said David Shinkfield, Head Master of Harrow Beijing. "The stories presented in the Harrow Cubs Football Club series provide a visual reference for our students that is unique to Harrow, and will reaffirm to them the concept that anything is possible if you apply the appropriate mind-set."

"In addition to academic excellence, the pursuit of knowledge and its application with compassion, the challenge of persevering and 'never giving up' when life gets tough, and the joy of participating in a full and positive way within a community, are qualities that typify a Beijing Harrovian," Shinkfield continued.

To view videos in the series, visit http://www.harrowbeijing.cn/newspost/~post/harrow-beijing-showcases-leadership-ethos-with-the-harrow-cubs-cartoon-series-20180619

Harrow Beijing offers a British-based international education to students aged from two to eighteen, with a focus on developing the necessary skills and attributes to allow students to be life-long learners. Drawing on the educational expertise forged at Harrow School London over hundreds of years, Harrow Beijing, in both the Lower School and Upper School, supports every student in achieving academic excellence with a wide and diverse range of activities that are geared towards developing an array of interests and skills.

Harrow Beijing, founded in 2005, enjoys a strong link with Harrow School London and with the other Harrow International Schools in Bangkok, Hong Kong and Shanghai. Unifying the link is the educational expertise forged at Harrow School London over hundreds of years, and in the core mission -- Leadership for a better world.