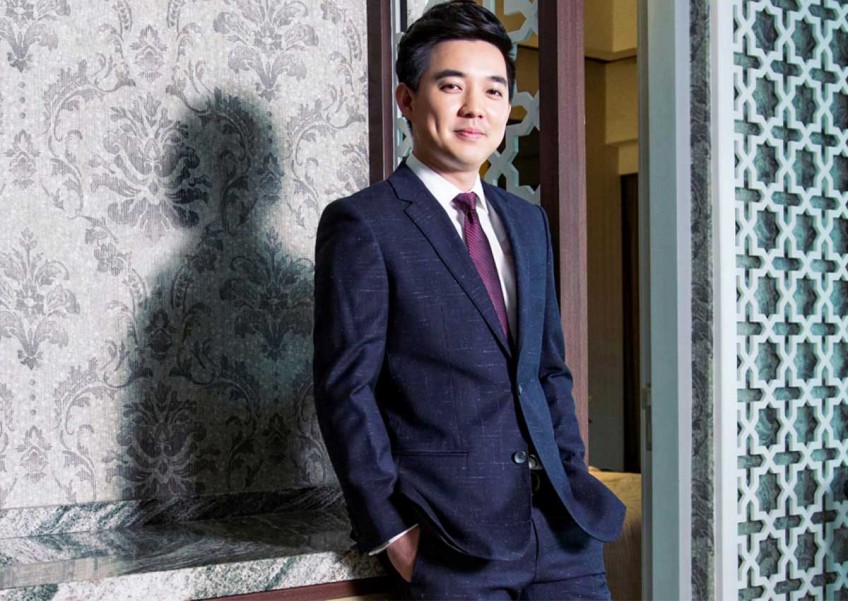 "The roughest patch was loneliness. Nobody believed we could do it. My brother and I gave up a few big things," says Mr Colin.
Hatten Land

Fresh after completing their national service, siblings Colin and Edwin Tan were labelled "crazy" for buying overpriced land in a Malaysian state 10 years ago for commercial development - they drew incredulous laughs from friends and frowns from Mom for giving up tertiary studies (their pursuit of degrees would eventually be accomplished) to build the biggest mall and hotel in "sleepy" Malacca.

For sure, they must have also felt the sharp pang of fear that their gut-driven plan could fail.

But the founding brothers of Hatten Group had the last laugh on Feb 28. Upon the backdoor listing of the property development arm Hatten Land on the Singapore Exchange's second board Catalist, which valued the firm at nearly S$400 million, these young boys' holdings were worth a cool S$300 million. Not too shabby for an investment that began with a S$30 million capital outlay 10 years ago.

"The roughest patch was loneliness. Nobody believed we could do it. My brother and I gave up a few big things," Mr Colin, Hatten Land's executive chairman and managing director, admits in an interview with The Business Times.

These days, Hatten Land is not only the largest owner of choice sites in Malacca, it is also the largest integrated builder there and quite possibly, the only Singapore-listed firm with a distinct "Malacca flavour".

The icing on the cake is that most of its sites face the sea, overlooking Pulau Melaka - a potential tourism and entertainment hub under a multi-billion dollar pact between Malaysia and China - and the Straits of Malacca.

That still may not excite those who prefer the more in-your-face Malaysian property plays with exposure in bustling Kuala Lumpur, Penang or Johor. But it may tickle the fancy of investors with a penchant for frontier markets with great untapped potential such as Malacca with a population of 900,000 but with a reach that way exceeds that at 15 million - that is, if you believe Mr Colin assumption which covers a 200km radius (or three-hour drive) from Malacca.

"Fifteen million is a huge number. It depends on how we design the buildings and integrate them to attract the numbers," Mr Colin enthused.

Hatten Group's development activity in Malaysia's quaint and historic state spans a decade and has earned it a sound track record of revitalising the state. "Malacca was sleeping for the longest time. We are there to revive it. Any areas that need rejuvenation, we plan to do it by retaining the history," he added.

There are only two big names in Malacca - Hatten and Mamee (Double Decker), Mr Colin laughs.

Under Hatten Group's belt is the largest shopping mall in the state after it took over an abandoned mall project that had been a sore sight for nearly four years from another developer and earned the goodwill of the state administration, a move which then helped propel the group's future activities in the state.

Timing was right on point. The mall was completed in 2008, around the same time that Malacca, together with Penang, snagged the brag-worthy Unesco World Heritage sites status, a move the local folk greeted with proud jubilation and vaulted tourism numbers in Malacca from five million to 16 million.

"It was just nice with the Unesco status coming in. So, you can say, we shared the good tide," he says.

Next on the group's agenda was to pick up a plot of private vacant land whose cost was perceived to be high but was less so when viewed against its potential plot ratio where the firm would build a hotel with 700 rooms. However, their attempt to get Hilton to operate and manage the hotel was spurned.

"They thought we were crazy to think we could fill the hotel. They walked away," he recalls. A closer look though made the idea less far fetched as Equatorial Hotel, located across from Hatten Hotel, had 400 rooms with an occupancy rate of 80 per cent. "Whatever happens, we thought we should be able to hit 60 per cent. We managed to find a team of consultants willing to come in and teach us to operate the hotel," he said.

That's how the firm ended up going in on its own to operate the hotel and has even managed to retain a 70 per cent occupancy rate and just over 80 per cent during the good times. Two years ago, the Hatten Group even completed Terminal Pahlawan - an extension of Hatten Hotel.

These three assets are not part of the listed company's portfolio of assets. "Nonetheless, the projects show the group's ability to execute developments in Malacca with each project generally taking two to three years to build," said NRA Capital in a report.

In recent years, fears of oversupply in the once-booming southern corridor of Malaysia that had long benefitted from its proximity to Singapore has turned investors more wary. Another disincentive is the perceived high crime rate there.

Malacca, being centrally located in Asia and a tourism spot where there is no big burst of supply in the market and where prices are relatively more affordable, sweetens the proposition for potential investors, remarks Mr Colin.

Hatten's target market is "second tier" or mid-market. "We are not targeting premium crowd who are not interested to stay in Malacca but the mid-tier who have money. Those who want to buy high end would be more keen to buy in KL, Singapore or Jakarta," he explains.

Hatten Land's current development portfolio comprises integrated mixed-use projects - Hatten City Phase 1 and 2, and Harbour City - and Vedro by the River, a commercial project. With the exception of Harbour City, which Mr Colin describes as the group's flagship project that's due for completion in 2020, Hatten City 2 and Vedro by the River will be completed this year. In other words, Hatten Land has clear earnings visibility, says UOB Kay Hian.

There are other things going for the state that makes Hatten Land a good proxy. Apart from Johor and Penang, Malacca is also regarded as a medical tourism hub.

Then, there is the far-reaching impact of the game-changing High Speed Rail Link that will connect Kuala Lumpur and Singapore which features a stop at Ayer Keroh, Malacca. Once completed in 2026, visitors will be able to travel from Singapore to Malacca in 50 minutes and from Malacca to Kuala Lumpur in 40 minutes.

Melaka Gateway is another growth lynchpin for the state where a bulk of Hatten Land's existing projects are located close to. For one thing, the Harbour City project, which comprises a mall, a water theme park and three hotel blocks, is located right at the mouth of the Gateway project where the new international cruise terminal will be constructed.

The China draw is hard to dismiss with the expansion of Malacca International Airport and the launch of daily flights from Guangzhou in Guangdong province, China to Malacca, which could boost tourist numbers.

"We are very happy that we bet on the right horse 10 years ago. But let's not allow ego to get in the way," says the self-professed Buddhist with unmistakable humility when asked how it feels to have made it big and rich.

This article was first published on March 20, 2017.
Get The Business Times for more stories.