SINGAPORE, Aug. 16, 2018 /PRNewswire/ -- Recently, MediaLink Foundation, the first blockchain based platform which is aiming at omnimedia content verification and distribution, has announced the closure of their million-USD financing round invested by Geekbeans Capital, Byte Capital, ChainUP Capital, ONE Capital, S.Capital, SinceUs Capital, CryptoNord, Singular VC, JinZe Capital and LingLu Capital. The purpose of this financing round is focus on product development, technical team expansion, user case development and domestic & international channels build-up.On August 1st,MediaLink had been listed on world top digital asset exchange CoinBene.com,and had launched a campaign that people trade MVPT on Coinbene can get villa and SUVs for free. 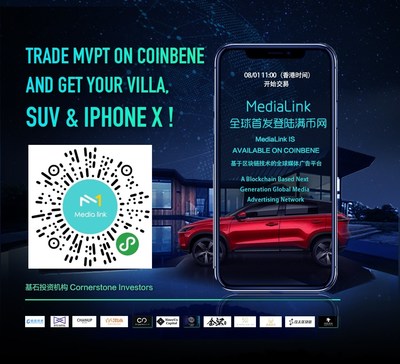 MediaLink had been listed on world top digital asset exchange ge CoinBene.com, and had launched a campaign that people trade MVPT on Coinbene can get villa and SUVs for free

In order to solve this pain point, MediaLink solution was created using blockchain technology, aiming at providing standardized and intelligent omnimedia content verification and distribution platform, through which a brand new peer-to-peer network is built for advertisers, content idea generators, distributors and consumers, combining multi-dimensional scenarios within the media advertisement eco-system. The network enables convenient and swift connections and transparent data exchange protocols, which redefines how media content is verified, distributed and measured throughout the transactions.

MediaLink generates a unique identity code for each advertisement, which can scanned by end consumers with MediaLink APP or Wechat micro-APP. And then consumers will get reward with MediaLink Value Point Token (MVPT) through Proof-of-Attention (PoA) concensus mechanism. In this process, consumers become the nodes in the network who participate in measuring the effectiveness of the advertisement, so their engagement becomes mining with attention. Advertisers, on the other hand, contribute MVPT and gain consumers attention and data. "Users are nodes, engagement becomes mining" is a good way to illustrate the concept of this model. This also gives analytical data and valuable insights to advertisers which enables them to optimise the advertisement for better RoI by creating a closed loop seamlessly connecting online and offline traffic. In future, MediaLink will also introduce advertisement procurement process, which uses MVPT as the circulated value media for the token economy, such as reasonable pricing of advertisement. Comparing to the current situation that lack of data support, trust and fair interest distribution, the innovative MediaLink solution will definitely be a revolutionary breakthrough to rewrite the industry standard.

MediaLink has an experienced and competent international team - Aurelian Zhu, co-founder of MediaLink, has 10+ years experience in Media Advertisement industry and has served as executive position in one top mainstream newspaper company in China. Kevin Zhang and Kenn Kong, other two co-founders, also have broad experience in Finance, Advertisement and Blockchain both in Europe and China. MediaLink's core technical team are based in Sweden and China. When it comes application scenarios, MediaLink's first batch of eco-system partners include: WPP - the largest advertisement company in the world, Kinetic - world leading outdoor advertisement agency, Accor Hotels - world leading hotel chain, GOME Electrical Appliances Holding Ltd - one of the largest electrical appliance retailers in China, as well as other category leaders such as Hylink, Youmi etc, who are covering hundreds million users in total. Currently, the development of MVP (Minimal Viable Product) has been completed and passed the code review, the team is focusing on the public test. MediaLink has also signed several commercial deals and is confident to become one of the few profitable blockchain startups in the near furture.

"Advertisement sector and blockchain technology have a nature fit, and it is very promising that, many of the unsolved pain points of traditional advertisement sector in the internet era, will be solved in the blockchain era", mentioned by Geekbeans Capital. As a leading Crypto Fund in China, Geekbeans Capital has invested in several top tier blockchain comanies such as IPFS hard drive mining machine - Maya technology, Branding, PR agency - ChainPlus, Digital asset exchange - SyEX and distributed storage solution Cume.