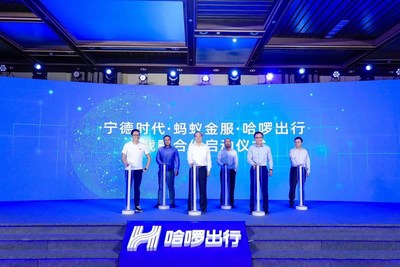 Chinese people have made use of bicycles for decades, and e-bikes present a new opportunity, especially for those who live in lower-tier cities. "China is a country on the two-wheels," said Yang Lei, the founder and CEO of Hellobike, "people take 1 billion two-wheels rides a day and among these, e-bike rides account for 70%, ie 700 million rides a day." In general, users have limited access to safe batteries and reliable charging stations. They often charge the batteries in unsafe environments, which has led to many fires. It is estimated that 90% of the batteries now in use are the lead-acid type that pose environmental hazards.

The unregulated e-bike battery industry cannot meet the demands of commuters. There are over dozens of millions of delivery people who rely on e-bikes and 500 million e-bike users in China. In 2017, the total battery power needed for all the e-bikes sold was 122 gigawatts, about 3.5 times more than what was manufactured. Less than 10% of all batteries meet the newly announced national requirements.

Hellobike's Chen Jun, who oversees the new battery changing services, said the joint venture will offer consumers a greener, smarter, and safer solution. The batteries will be stored in theft-proof stations and charged safely at authorized locations. Riders will be able to use the new stations to swap dead batteries for fully charged ones. With the nudge of the new national standard, the transition to safer battery powered e-bikes is being accelerated.

Hellobike's existing e-bike service already swaps out rechargeable batteries for part of its self-operated e-bikes. As the leading player in the two-wheel transport industry, Hellobike now teams up with these two leading partners to build this network of service into a long-term, basic energy source for society. Hellobike has learned useful lessons from its bike/e-bike business and existing battery sharing programs. It is an agile company known for its quick response to dynamic market changes. Hellobike's strong off-line operation experience and user-oriented mindset is likely to make it stand out from the competition in this quickly advancing industry.

The leading vehicle battery manufacturer CATL will provide the batteries for the new joint venture. CATL batteries are more durable, can be charged more times, and last longer than those sold by competitors. Ant Financial, for its part, plans to encourage its 1 billion members to use the new network and reduce their environmental impact. Riders will be able to use Alipay to unlock and pay for the e-bikes.

About Hellobike
Hellobike has continuously built user-friendly and sustainable transport services in sectors such as shared bicycles, shared e-bikes and car-pooling. As a business leader in two-wheeled transport, users have taken more than 12 billion trips on Hellobike vehicles over the past two and a half years. Hellobike now operates in more than 360 Chinese cities.

About CATL
Contemporary Amperex Technology Co Ltd (CATL) was established in 2011 and its headquarters are in Ningde, Fujian province. The company specializes in R&D and sales of e-vehicle battery and energy storage systems. It focuses on battery materials, systems, and recycling, and has formed a comprehensive production system. The company's products have been widely recognized, and it has established partnerships with top international automakers in Germany and the United States.

About Alipay
Alipay, founded in 2004, is committed to building an open, shared and trusted platform for global consumers and SMEs through technological innovations and convenient services. At present, the Alipay app serves nine overseas payment platforms and has more than one billion active users worldwide.