JAKARTA, Indonesia, Nov. 25, 2021 /PRNewswire/ -- HiSceneTeam launched FunnyGo App for users in Indonesia in June this year. Up to now, there have been 1 million people who have downloaded this App and have made money by watching videos on it. 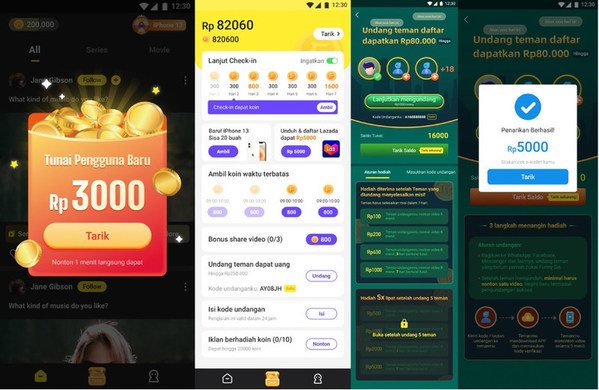 FunnyGo APP is a platform to watch videos. On this APP, users can watch tens of thousands of popular videos for free.

More importantly, while watching videos, users can easily make money on the APP. According to Hisceneteam's product manager, users will get gold coins as long as they download the APP, and then they can redeem them into cash. Users can also get more gold coins by watching videos on the APP or inviting friends to download Funnygo. On Funnygo, some people have earned Rp 100,000.

In addition, there are many events on the FunnyGo APP. Users can participate in the events and then get more rewards. For example, users would have a chance to win iPhone13 if they participate in "the lottery".

The product manager of HiSceneTeam revealed, in order to give users a better experience, FunnyGo has upgraded the product. Everyone can withdraw the first cash on the same day as long as they download the APP, and the cash will be credited immediately.  Users can withdraw cash through multiple channels such as Dana and OVO.

In order to welcome the New Year, FunnyGo will launch more events in December, where all the rewards will be doubled. For more information, please download FunnyGo APP on GooglePlay.