QINGDAO, China, March 8, 2021 /PRNewswire/ -- Global employment losses for women stand at 5%, versus 3.9% for men in 2020, according to the ILO Monitor. In particular, women are much more likely to drop out of the labour market. Notwithstanding a more competitive pressure on women, Hisense (600060.SH) adheres to empowering more women to achieve accomplishments while taking up challenges.

Gender Equality in the Workplace

Hisense values respect, dedication, innovation, and efficiency as its corporate spirit. "Respect" comes out on top of the list. The company advocates gender equality and provides equal employment opportunities for female employees worldwide. The proportion of women in Hisense's global employment is around 40%, higher than the global average of 38.89% (according to the World Bank).

Hisense encourages more females to pursue career paths, breakthrough bias and accomplish higher workplace positions. At the Hisense factory in Atlantis in 2018, 80% of the team leaders in the TV production chain are female employees, and a large scale of the factory's administrations are taken by women. The strength of women's meticulousness and patience contribute significantly to Hisense's growth. 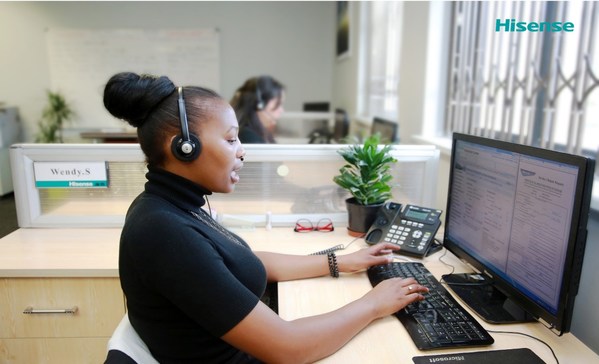 Across the globe, Hisense has many intellectual female executives who have taken up challenges and led their teams to break down barriers posed by the pandemic.

Ms. Tania Garonzi, Vice-President of Hisense Australia, led her team to work from home during the lockdown in Australia, attaining impressive sales results. In 2020, a TV sales volume of 510,000 with a year-on-year increase of 15% was achieved by her team, ranking second in Australian market. 325,000 refrigerators were sold with a delightful increase of 28%, year-on-year.

Moreover, she concerns about her team members' wellbeing and work-life balance in the new normal. She encourages and guides them to confront challenges in a flexible way. "Our team's ability to adapt to new ways of working and stay positive in the face of adversity played a critical role in helping us to achieve this success," said Tania.

Hisense also cares for women on the athletic fields. As the official global partner of UEFA Women's EURO in 2017 and 2022, Hisense devotes itself to encouraging women's professional sports and inspiring female athletes to chase their dreams through the partnership with women's sports games. On the e-sport field, Hisense is also contributing to a platform for female players to achieve their dreams and values.

As a global technology company, Hisense is committed to inspiring women and empowering them to succeed. During these difficult times of the pandemic, Hisense will continue to stand with women worldwide to overcome the current dilemma, take up challenges boldly and progress to be a better self in different positions of various industries.