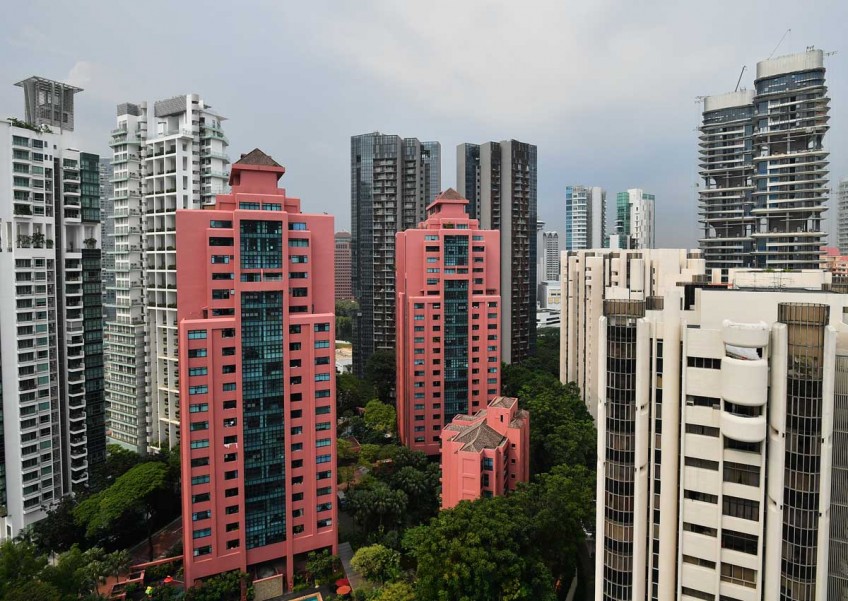 Condominiums viewed from Leonie Tower A on March 24, 2017.
The Straits Times

The chairman of Hong Kong-listed Brightoil Petroleum Holdings lost a court case involving the law on common property in Singapore on Tuesday (March 28).

Dr Sit Kwong Lam, whose net worth is listed at US$2.1 billion (S$2.9 billion) by Forbes, lost the case to keep floor deckings and an air-conditioning unit affixed to common property adjoining his Ardmore Park penthouse in Tanglin.

At issue were the timber deckings he had installed over the entire roof outside his unit, including the floor trap and drainage system, as well as two ledge areas that ran along a segment of his condo unit's external facade.

Here are other disagreements over condominium matters:

Owners at the condo in River Valley Road area faced off over a decision regarding the condominium's cooling towers.

The management corporation (MC) wanted to dismantle the cooling system, which has outlived its estimated service life of 20 years. The decision was backed by 82 per cent of owners at a meeting in 2016, but can only be done if there is a unanimous resolution.

The lone dissenter, Madam Yap Choo Moi, 67, felt that removing the cooling towers would require her to install a new system, which would "lower her quality of life".

The parties settled the case out of court in 2016. The terms are confidential.

The High Court ruled in March that members of the outgoing Neptune Court Owners' Association (NCOA) management committee will have to pay more than $420,000 to the condo's estate fund.

It had not observed proper procedures when it decided, without permission from its residents, to use the funds to pay for legal fees for a failed defamation suit against 26 residents in the Marine Vista condominium.

A band of some 200 home owners in La Fiesta in Sengkang are irate over "massive" air-con ledges in their homes.

Oversized air-con ledges in the newly built condominium in Sengkang have cast the spotlight on a loophole that allows developers to build them without having them counted as part of the gross floor area (GFA).

Yet, they are allowed to charge home buyers for that same space.

Having paid, on average, $1,174 per sq ft of space, La Fiesta residents estimate they have paid about $18 million in unused space for their air-con ledges.

This is not the first time problems arose for residents who received the keys to their homes in June 2016.

About 500 home owners hit the developer with complaints of shoddy workmanship and poor design for the Design, Build and Sell Scheme flats.

Complaints included cabinets and shelves that had signs of wear and tear, alongside cracked bathroom tiles and ponding in some parts of the units.

Some units were also hit by water seepage that stained walls, damaging furniture and attracting insects to the wood rot.

The property is built by EL Development (ELD).

Software engineer Zou Xiang, 41, noticed that the balcony of his fourth-storey $2 million double-storey penthouse did not have grilles, and wanted to install them for the safety of his children in May 2016.

But the management committee (MC) of the condominium off Adam Road rejected his application and subsequent appeal.

He went ahead anyway, but the MC stopped the workers and called the police.

In July 2016, Mr Zou wrote to the Building and Construction Authority (BCA) and was told he should be allowed.

The MC sent him a letter in August 2016, saying that his balcony was classified as a "roof garden".

Apart from losing sleep over the dispute, Mr Zou would rush home after work, and his wife would call their helper thrice daily to check on the children.