HONG KONG, March 25, 2022 /PRNewswire/ -- The Hong Kong Comics and Animation Federation (HKCAF) launched the 1st "HK Comics Support Program" (the Program), which was supported by Create Hong Kong (CreateHK) of the Government of the Hong Kong Special Administrative Region as the lead sponsor. An online Kick-off Ceremony was held today announcing the 15 local comic start-ups selected to participate in the Program, their comic artists and comics proposals. The organiser was honoured to have Ms. Jersey YUEN, Assistant Head of CreateHK as the ceremony's Guest of Honour. She was joined by Mr. Tony WONG, Chairman of HKCAF; Mr. MA Wing Shing, representative of the Program's Judging Panel and Mentors; and Mr. Alan WAN, Vice President of HKCAF to officiate at the ceremony. 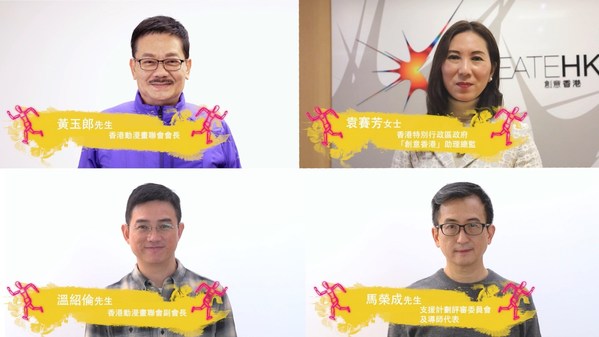 HKCAF launched the HK Comics Support Program, which was supported by CreateHK of the HKSAR, held an online Kick-off Ceremony announcing the 15 local comic start-ups selected to participate in the Program, their comic artists and comics proposals. It was honored to have Ms Jersey YUEN, Assistant Head of CreateHK, Mr Tony WONG, Chairman of HKCAF; Mr MA Wing Shing, representative of the Program’s Judging Panel and Mentors; and Mr Alan WAN, Vice President of HKCAF to officiate at the ceremony.

The Program has received an overwhelming response with nearly 80 applications, and the themes of the applying comics proposals were diversified. After reviewing the creativity and market potential of these proposals, the ability of their production teams, their comic artists' styles and skills, as well as the past performance of the applying comic start-ups and the comic artists etc., the judges selected 15 local comics start-ups and their comics proposals that would receive the subsidy (subsidised comics).

Mr. Tong WONG, Chairman of HKCAF, said, "The number of applications for the Program is beyond our expectation. This proves the passion of local talent in comics creation and their strong wish to join the Program with a view to enhancing their skills of production, creating unique comics works, exploring new markets and further developing their own brands. The Program provides a platform to facilitate passionate and creative comics artists to show their capability in comics work to further explore the local and oversea markets. Among the 15 selected works, I am delighted to see that they are rich in themes and of diverse styles."

Ms. Jersey YUEN, Assistant Head of CreateHK, remarked that the Program is the first project in Hong Kong that directly supports local comics artists' creation. It marks a new milestone of CreateHK's support to the local comics industry by nurturing more talent from the creation perspective, which will help inject a robust new energy to Hong Kong comics.

Mr. MA Wing Shing, representative of judging panel and mentors, mentioned, "I am glad that the Program can help comics artists brainstorm diverse themes, create original comics with personalised styles and original ideas. I hope the participants can gain fruitful experience and enjoy the production of comics work by trying their utmost under the Program."

The Program provides comprehensive support to the 15 selected local comics start-ups including training and guidance from industry experts, as well as a maximum subsidy of HK$210,000 for each selected comics start-up to create their own brand-new original comics. A series of promotional activities will also be arranged by the Program, such as exhibiting the subsidised comics of the selected comics start-ups at the Animation-Comic-Game Hong Kong (ACGHK) to be held in July 2022 and the Malaysia Comic Fiesta scheduled for December 2022. Both exhibitions will help the Program's participants maximise their exposure and potential business opportunities in the local and overseas markets.

The 15 selected comics start-ups are listed as below in alphabetical order of the company names:

More details of the 1st "HK Comics Support Program" are available on the official website at: https://www.hkcsp.hk/.

Create Hong Kong (CreateHK) is a dedicated agency set up by the Government of the Hong Kong Special Administrative Region in June 2009. It is under the Communications and Creative Industries Branch of the Commerce and Economic Development Bureau and dedicated to spearheading the development of creative industries in Hong Kong. Its strategic foci are nurturing talent and facilitating start-ups, exploring markets, and promoting Hong Kong as Asia's creative capital and fostering a creative atmosphere in the community. CreateHK sponsors the HKCAF to organise various projects, including the 1st "HK Comics Support Program", to promote Hong Kong's animation and comics industry. Website: http://www.createhk.gov.hk.