How to make cashless king 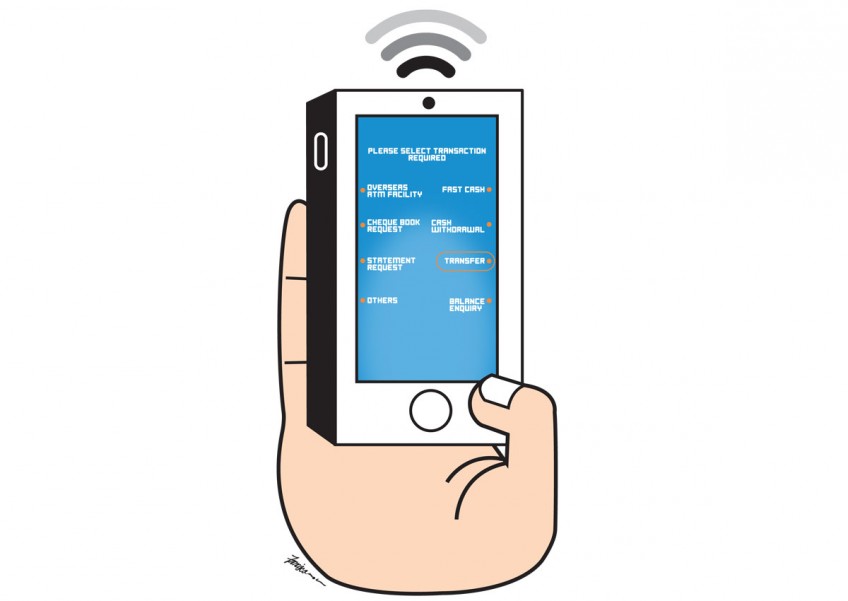 Cash and cheques remain main modes of payment in Singapore. It's time to overcome obstacles and speed up electronic payments.

Each week, Cabinet ministers in Singapore gather for lunch. One minister is in charge of collecting payment. "A great step forward" was made some time ago, when that minister asked for cheques instead of cash.

Sharing this story at a tech summit last month, Prime Minister Lee Hsien Loong added: "The permanent secretaries told me they are one step ahead, they use PayLah, which is a DBS application. But it shows how non-pervasive it is and what the potential is if we can get it through."

"It" refers to newfangled payment methods like paying with apps. PM Lee's self-deprecatory, good-humoured anecdote underscores the irony that leaders of a place that calls itself a Smart Nation still pay for lunch using actual dollars and cents.

No wonder PM Lee lamented: "From the point of view of users, and if you compare with other countries, there is a lot more we have to learn.

"We have not gone as far as we need in order to do cashless payments in hawker centres, in shops, between people."

Electronic or e-payments include those made online or through mobile banking transfers, mobile wallets, credit and debit cards and smartphone apps. Despite its Smart Nation ambitions, Singapore lags behind other countries in e-payment adoption. As PM Lee said: "For all our pushing, we really are not going as fast we ought to."

How far behind is Singapore and what accounts for this lag?

To be sure, Singapore started relatively early. The Interbank Giro system started in April 1984, the first to allow consumers to directly transfer funds to the bank accounts of others. But it is an offline system as transfers do not happen immediately.

A national campaign to minimise cash transactions was launched in March 1985. The Nets service came soon after, officially introduced in 1986, allowing consumers to use ATM cards to pay shopkeepers directly from their bank accounts.

Today, there are more modes of e-payments. These include major mobile wallets such as Apple Pay, Android Pay and Samsung Pay that let people pay using mobile phones.

Banks also have their own mobile services such as DBS' PayLah and the Standard Chartered-Singtel Dash, which allow users to pay friends and businesses that use the same apps, and using phone numbers, even if they use different banks.

Dash can be used at stores like Watsons, in Comfort cabs and even on public transport while PayLah is used by businesses like retail portal Qoo10.

A DBS spokesman says PayLah has more than 500,000 registered users, and daily transaction usage has doubled year on year.

Mr Ravi Menon, managing director of the Monetary Authority of Singapore (MAS), noted last August that bank apps "can do even more". For instance, OCBC Bank's Pay Anyone allows customers to send money to friends in Singapore, using just a mobile number, Facebook ID or e-mail address. United Overseas Bank has UOB Mighty, "an all-in-one mobile banking app and wallet similar to Android Pay", he said. These allow credit or debit card users to make contactless payments with smartphones, and "hold" more than one card in the app.

Despite "a bit of payments innovation" here, Mr Menon noted that "our payments experience needs to be as good as the best we see globally".

He cited as an example Chinese app WeChat, which "integrates social media and payments to let users make seamless peer-to-peer payments, shop online and even pay at physical merchants".

WeChat has more than 700 million users, and many bank accounts are linked to it. WeChat's payment services include fund transfers and can even be used to pay wet market stallholders.

What accounts for the tardiness in payments innovation here?

Analysts blame it on cash and cheques being too easily available.

Mr Chia Tek Yew, head of financial services advisory at KPMG in Singapore, says Singapore is more reliant on cash and cheques compared with other developed economies in Asia like Japan, South Korea and Hong Kong. In Korea, only about 20 per cent of payments are made with cash - among the lowest in the world.

In contrast, cash remains king in Singapore. A study last year found that 60 per cent of consumer payments were in cash while 30 per cent of business transactions used cheques in 2015.

Cash in circulation in Singapore is 8.8 per cent of GDP, compared with 4.4 per cent in Australia, and 2.12 per cent in Sweden.

In Sweden, the total number of cheques issued is close to zero.

About 90 per cent of Housing Board households have access to a local bank ATM within 500m of their homes.

In contrast, developing economies like India or Indonesia may not have many retail bank outlets in rural areas where people can withdraw cash. So financial institutions are quick to provide cashless solutions. When many people do not have bank accounts, or even an official ID, providers find innovative, simple ways to get what are called "unbanked customers" quickly.

India has its Unified Payment Interface, a government-backed mobile phone payment system that requires only an identification number for instance, and was easy to implement as India started issuing digital identities to everyone.

China, on its part, wanted easy and seamless payments as the world's largest e-commerce market with a massive population spread across the country.

Another reason for the slow take-up of e-payments here is cost.

SMEs account for more than half the payments in the retail trade, according to Nets chief executive Jeffrey Goh, and they have yet to embrace cashless solutions like major merchants have.

A Starbucks Singapore spokesman said its updated Starbucks app, for instance, not only allows customers to pay for food and beverages quickly but also to redeem rewards.

Merchants need to fork out money to set up e-payment systems - for terminals to take credit card and Nets payments, for example. Merchants also pay fees for processing of credit card payments.

Analysts say another big reason for the slow take-up is the sheer complexity of existing payment systems. This results in people carrying different cards for different purposes. For merchants, it means a bewildering and costly array of card readers or terminals they potentially need to install.

In technical parlance, the card systems are not interoperable - proving a killer obstacle to widespread adoption.

Take hawker stalls, one of the examples cited by PM Lee. There are 15 hawker centres in Singapore accepting Nets FlashPay payments.

Madam Alison Koh, 52, co-owner of Uncle Lim's Beverages, was one of the early adopters at the Beo Crescent Market and Food Centre to accept contactless FlashPay card payments in 2014. She said out of 10 customers, four or five use FlashPay, and tend to be "youngsters, white-collar office workers or school students".

In contrast, older folk tend to carry only their senior citizen concession cards which use a different system called ez-link.

This is the preferred card for public transport as users enjoy cheaper fares - even though FlashPay has been available for transport and retail use since 2009.

Places like Hong Kong and South Korea have streamlined transit payment and use common systems instead of several.

Then there are natural fears over security, like transferring funds to the wrong person, or wrong account, and these can explain reluctance from both merchants and consumers to embrace e-payments.

WHAT IS TO COME

The good news is that several upcoming initiatives aim to simplify payments.

By the middle of this year, transferring funds to a colleague or stallholder using mobile phone numbers - even if they use different banks- will become a reality.

Called the Central Addressing Scheme, Dr Vivian Balakrishnan, Minister-in-charge of the Smart Nation Initiative, said this is one way to get a move-on with e-payments in Singapore.

Nets is also upgrading its terminals to accept payment from all banks and payment networks, be it through cards or mobile wallets. These can already be seen in supermarkets such as FairPrice, Sheng Shiong, Giant and Cold Storage, convenience store 7-Eleven, Comfort Cabs and some fast-food joints like McDonald's, KFC and Pizza Hut.

The Government is also exploring a one-stop platform for government payments through mobile phones, and improving transactions with businesses.

Just what has caused this spurt of momentum? A report last year, commissioned by MAS and conducted by KPMG, laid out a road map to e-payments.

While things are finally speeding up on the e-payment front, with banks and start-ups building the infrastructure, the future will be determined by users.

Nets' Mr Goh said: "Cashless initiatives are driven primarily from the ground up through social media and e-commerce. With the high usage of smartphones and a good mobile infrastructure, cashless payments have become more pervasive in China."

People there have clearly taken to being cash-free and even give digitised red packets during Chinese New Year.

As for SMEs, Mr Chia of KPMG suggests encouraging smaller merchants - including schools and government agencies - to use digital wallets or P2P (peer-to-peer) transfers.

They can also use payment methods that are technology-light and commission-free.

He said: "Once consumers are comfortable that more than 90 per cent of their spend can be electronic, they will feel a lesser need to even go to an ATM."

The next one to two years will be crucial in determining if e-payments can take off. There has to be more collaboration between the private and public sectors to ensure that payments are seamless and simple, people can reduce the number of payment cards they carry, and merchants have systems that can read multiple types of cards from multiple banks.

Public education will also be key.

Only when e-payments are simple and low-cost will consumers and businesses be weaned off their fondness for cash and cheques and start taking steps towards a cashless future.