Before I Was Boss: Airbnb co-founder was once an NBA ball boy

They can sometimes motivate young minds to make their mark in the world like in the case of Joe Gebbia, the co-founder of global home-renting service Airbnb and one of America's richest entrepreneurs under 40.

You see, Mr Gebbia worked as a ball boy in the US National Basketball Association (NBA) during his high school days.

For three seasons, he watched the creme de la creme of the premier basketball world play in front of his very eyes and was struck by how they had trained their whole lives to enter the coveted league.

"I was really inspired," Mr Gebbia told AsiaOne in a phone interview last week. "I decided that I wanted to be in the same league, in terms of entrepreneurship."

Yes, as a teenager, the 35-year-old already knew he wanted to become his own boss one day.

He credits this vision to his parents, who showed him the joy of being entrepreneurs when he was growing up.

The seed for his dream was sowed in 2007, two years after graduating from the prestigious Rhode Island School of Design with dual degrees in Graphic Design and Industrial Design.

He had invited his college friend Brian Chesky, both 27 then, to San Francisco so they could discuss starting a business together.

The two unemployed designers soon found themselves struggling to pay the rent for their apartment, and were looking out for ways to earn some cash.

There was going to be a huge design conference in the city, but many hotels were fully booked.

They saw an opportunity there - why not rent out their place for visitors to sleep over, with breakfast in the morning?

The pair went out to buy three airbeds and created a simple website, airbedandbreakfast.com. They scored three guests, who each paid US$80 (S$112) for the accommodation.

Excited to expand on this idea to target conferences and festivals around the US, Mr Gebbia roped in his former flatmate Nathan Blecharczyk, a computer science graduate from Harvard, to develop the website.

But the co-founders had a rocky start. They fell in debt and were not getting enough bookings. Nobody wanted to invest except venture capitalist and computer scientist Paul Graham, who recognised the potential of the three young entrepreneurs.

In early 2009, Mr Graham accepted their business into his start-up mentoring programme Y Combinator, known for its stringent application process, which provided Air Bed & Breakfast with a much-needed seed fund of US$20,000 (S$27,900). 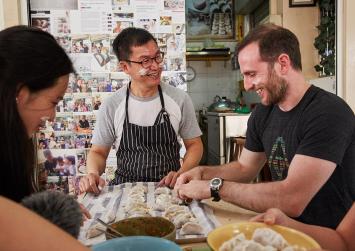 Things went uphill from there.

Teething problems were fixed, the customer base grew and more investors including actor Ashton Kutcher were putting their money into what was renamed as Airbnb.

Mr Gebbia said it took four years for Airbnb to finally gain traction, hitting a million bookings in 89 countries in 2011.

The start-up is now worth over US$30 billion, and has become more than just a home-rental service. Users can also book local experiences via Trips, which was recently launched in Singapore.

There's also Places, which are essentially guides created by locals to help travellers discover everything from hidden gems to events. Places will roll out in Singapore later this year.

#Airbnb #before i was boss