business
#before i was boss

Before I Was Boss: Matchmaking is her calling, says Lunch Actually founder 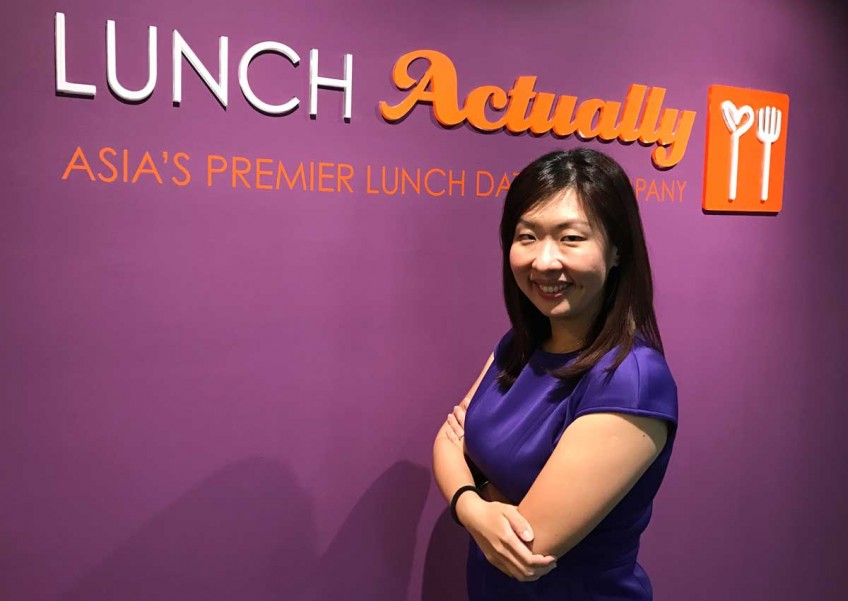 She was the stereotypical model student.

Not only did she top her cohort five years in a row back in primary school, she also aspired to be both a doctor and a lawyer - at the same time.

One might wonder how Lunch Actually founder Violet Lim strayed from her childhood ambitions in order to be what she is today - a matchmaker. A modern-day one, that is.

Granted, she did give corporate life a shot but came to the conclusion that she should start her own business.

"When I first told my parents I was going to quit my job (at a bank) to be a matchmaker, their jaws dropped and they wanted to kill me," Lim told AsiaOne in an interview.

It was precisely due to her job at a bank that allowed her to see a gap in the market.

When I first told my parents I was going to quit my job (at a bank) to be a matchmaker, their jaws dropped and they wanted to kill me

"I noticed a lot of my colleagues were single yet at the same time, many of my friends (outside of work) were getting married," Lim, 37, said.

She also realised that her friends who were about to tie the knot had met each other in university - the same way she met her husband as well.

She continued: "If you miss that opportunity, it gets more difficult. It's a real thing."

For the record, Lim started dating at the age of 15 - around the same time she stopped being a top student, to which she admitted with laughter.

But good grades were never an issue for her.

The straight-A student went on to read law at the University of Manchester in the UK and later completed her Master's degree in Industrial Relations and Personal Management at the London School of Economics.

Despite her parents' advice to start the business on a part-time basis, Lim dove straight into it.

Today, her company boasts over 100 employees with offices in Singapore, Hong Kong, Malaysia, Indonesia and Thailand.

They have arranged over 93,000 dates across Asia and Lim has attended close to 10 of her clients' weddings.

Part-time job taught her about entrepreneurship

Before she became a full-fledged entrepreneur, Lim did dabble in a couple of part-time jobs - including one serving up bagels at a small store in London back as a graduate student.

"It was actually quite tough!" Lim recalled.

"But I do feel that it was so interesting and I learnt from (the job) just by how systematic everything was. I wasn't familiar with (running a) business back then so I thought I could do things 'anyhow'.

"However, everything I had to do was so exact so that was my learning point."

'Be a leader, not a follower'

You could say that Lim was destined to be her own boss.

Her father had always advised her to "be a leader, not a follower".

The signs were clear even when she was a young intern, venturing into the corporate world.

When the time came for her to give an assessment of how the internship went, Lim revealed she "didn't try to be politically correct" and was even asked by her supervisor to tone down her responses.

What works for me might not work for you. Why we expanded into so many types of services is because we want to have different platforms for different types of singles out there.

She refused. Needless to say, the report written about her "wasn't that fantastic" too.

But she maintains that she wouldn't have done it any other way.

"I think people should stick to their principles. At Lunch Actually, we have a lot of different 'laws'," Lim said.

"One of it is to 'always do the right thing' - and it's my favourite law."

For Lim, doing the right thing also means helping singles find love and hope that they make it down the aisle.

No perfect way to date

Despite being in the business for 13 years, Lim stresses that she has never claimed that lunch dating - her company's business model - is the "best" way to date.

"There's no perfect dating platform," she let on.

"What works for me might not work for you. Why we expanded into so many types of services is because we want to have different platforms for different types of singles out there."

I think romance is not just about how you met. The truth of the matter is that in a relationship, there are so many ways to romance your other half.

When asked if she thinks the only challenge in dating is not meeting the right one, the mother-of-two let out a big sigh.

"We hear a lot of stories like people who met on an airplane, exchanged numbers and are now happily married. It's a true story I've heard - but these are exceptions. Not the norm." Lim said.

She confessed: "I get frustrated when people hold out for this kind of serendipity.

"I think romance is not just about how you met. The truth of the matter is that in a relationship, there are so many ways to romance your other half."

When the going gets tough

As one of the pioneers in Singapore's matchmaking scene, Lim has had instances when she struggled a little.

To just know the impact of the work we've done and the lives we've touched, despite everything we've put up with, it's fine.

In fact, the journey has been "draining and emotional" - even for her.

She's met her fair share of nasty clients who chided her for doing "a bad job", for whatever reasons they might have had.

But for a go-getter like Lim, it's going to take more than that to make her throw in the towel.

It's clear that she means well. Lim keeps a personal folder of photos of couples that had met through her and even has pictures of their babies.

She said being a matchmaker has always been her "calling".

"To just know the impact of the work we've done and the lives we've touched, despite everything we've put up with, it's fine."

"People ask me how I juggle (work and personal life), I said it's firstly because of support (around me) and also because I'm running my own business," Lim shared.

She admitted that if she were working for someone else, it wouldn't be as easy for her to spend quality time with her son and daughter, aged 11 and 8.

These days, Lim offers the same privileges in terms of flexible working hours and the amount of leave given to her associates, especially those at senior management level.

However, she emphasised: "(With the freedom I give), the expectation is that, if I'm going to call you at midnight - I'd expect you to pick up my call."

Spoken like the true blue #GirlBoss that she is.