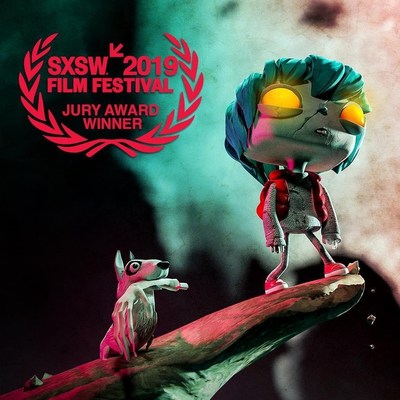 Gloomy Eyes is the first VR animation HTC VIVE produced in collaboration with international collaborator. The series consists of a trilogy. The sexy celebrity Colin Farrell was invited to dub the film in the first episode. Another VR film The Making Of, produced by HTC VIVE under the umbrella film series project 5x1, directed by Midi Z was also nominated by SXSW Film Festival for its Virtual Cinema session. Both films have entered the finalists of "Best 360 video", "Best Storytelling", and "Best use of immersive arts". At the Austin Premier, Gloomy Eyes and The Making Of gathered the longest queue for experiencing the films. Audiences gave the fine 6K quality of HTC VIVE PRO thumbs up. Many of them even felt "hungry" after seeing the dumpling-eating scene in The Making Of.

The VR animation Gloomy Eyes, EP1, The Encounter was produced by HTC VIVE VR Content Center in collaboration with Atlas V, a famous French animation company in collaboration with the Argentinian studio 3DAR, the European broadcaster Arte and the US studio RYOT. Liu Szu-Ming, Vice president of HTC VIVE VR Content Center and co-producer of Gloomy Eyes, EP1, The Encounter said: "I am very pleased that after the recognition by the Sundance Film Festival, Gloomy Eyes, EP1,The Encounter won the best VR short film award at the 38th Brussels International Animation Film Festival on the 10th; while it won the best storytelling award in SXSW festival, winning awards from three film festivals. It is truly a breakthrough for HTC VIVE, who devotes to the development of HTC VIVE originals." HTC VIVE VR Content Center has developed various VR production in the past two years, and also created the VR commercial theater management system. Besides the production of the VR animation Gloomy Eyes, the global screening of Gloomy Eyes will help the distribution of HTC VIVE content in the European, American and Asian markets.

After learning Gloomy Eyes, EP1, The Encounter has received the award, producer Antoine Cayrol said with pleasure: "All the Gloomy Eyes, EP1, The Encounter team is very grateful for being awarded Best Storytelling piece of the Virtual Cinema at SXSW. Innovation in technology and groundbreaking storytelling have always been the heart of this unique festival. And today is the first year that emerging storytelling is receiving official awards, it feels like a very special to us."

The game engine real-time computing is applied to Gloomy Eyes, EP1, The Encounter with the mobility of HTC VIVE 6DoF (6 degrees of freedom). Viewers are allowed to freely walk around when watching the films as wandering in the world of animation. The story narrates that a boy has no choice but escape into a forest to avoid the bounty hunter since he stole the belongings from the chief of the village. He then falls in love with a girl he meets during the journey.