BEIJING, June 5, 2019 /PRNewswire/ -- iQIYI, Inc. (NASDAQ: IQ) ("iQIYI" or the "Company"), an innovative market-leading online entertainment company in China, announced that its animated film Spycies (the "Film") made the five finalists in the Animated Films category of the Golden Goblet Award at the 22ndShanghai International Film Festival. The film is set in a society of animals that follows the adventures of a group of animal detectives. Through their crime-solving quests, we follow the trials and tribulations, twists and turns and hilarious comedic feats of the story. 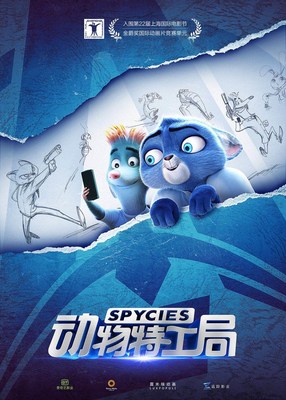 With the development of animation in China over the last few decades, Chinese animators have made unremitting efforts on creating domestically produced animated films, which has led to the emergence of many highly reputable Chinese animated works, such as White Snake, Big Fish & Begonia, Monkey King: Hero is Back and many more. iQIYI has always been adamant about producing high-quality film content and Spycies was no exception. The creative team demonstrated their limitless creativity and originality as they animated over 40 species of animals and over 90 individual characters, making it the Film with the most distinct animal character appearances in animated film history. Additionally, each character's animal patterns and details of texture, dimensions, and density of the animal's skin or fur were all animated in a way that replicated the physical properties of their real-life counterparts.

"We are incredibly honored that our animated film is recognized at such a prestigious level," said Ya Ning, President of iQIYI Pictures. "This not only serves as a drive for us to continue to produce films of international standard, but also validates our mission to communicate the potential of China's film industry by bringing forward quality Chinese works to wider global audiences."

During the 2018 Cannes International Film Festival, the Film became the first Chinese animated film to enter Annecy Goes to Cannes, the prestigious showcase of animated films at the festival. With the exquisite animation, wonderful yet humorous storyline, and emphasis of values of cherishing friendship and protecting nature, Spycies was well-recognized by many international industry peers and received high praise and applause from international audiences and media, showcasing Chinese culture's unique charm. After this magnificent feat, the Film was brought to other international markets including France, Japan, the United States and more.

Since its establishment in 2014, iQIYI Pictures has continued to maintain the notions of "youth, quality, and diversity" in its creative conceptualization and development. In the 53 films produced by iQIYI so far, the company has won over 50 film awards around the world. The Shanghai International Film Festival is the only A-list film festival in China with the Golden Goblet Award being the award of highest honor, judged by renowned international judges from various nations. The recognition of Spycies as a finalist for the award proves the strength and quality of iQIYI's film production and continues to illuminate them as a creative force worth being recognized globally.