SHANGHAI, Nov. 2, 2017 /PRNewswire/ -- iQIYI, China's largest online video and entertainment service provider announced the launch of over 200 shows for next year and planned to team up with Baidu on more AI applications in the online entertainment sector. 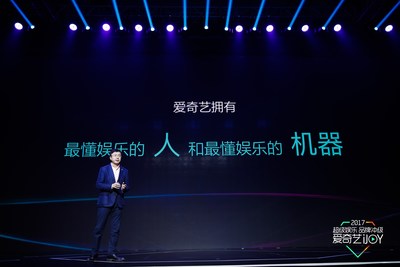 Gong Yu, founder and CEO of iQIYI, said iQIYI has not only had the people who understand the entertainment industry better than others, but also ‘machines’ that have the know-how about entertainment.

The vast trove of titles to be produced and streamed next year include the return of several mega-hit dramas such as adventure dramas Tientsin Mystic and The Lost Tomb as well as The Rap of China, a hugely popular talent show produced by iQIYI this past summer. In the pipeline are also some brand new shows including Hot Blood Dance Crew and Clash Bots.

Such undertaking has put iQIYI on a solid path to "become a great company driven by technology innovation", Gong Yu, founder and CEO of iQIYI, told the press conference in Shanghai earlier this week.

"iQIYI has not only had the people who understand the entertainment industry better than others, but also 'machines' that have the know-how about entertainment," Gong said. "So what drives iQIYI ahead is not only our strength in content production, but also our technology innovation capability."

The company has already benefited immensely from its dedication to sci-tech innovation including the application of AI, which has improved productions, sourcing, distribution and marketing to monetization.

For instance, AI technology has helped iQIYI come up with the right ideas for content production and investment, and developed the best strategy to promote contents. Currently, the online traffic-prediction system developed by iQIYI is around 88% accurate in predicting the number of views a drama could receive up to 12 months before its premiere on the video platform.

In terms of content production, the AI-supported intelligent system has played an important role in playwriting and casting for original shows developed by the company. The cutting-edge technology has also been widely applied in the company's daily operations from video encoding, clipping, key-word searching to filtering, which has improved the operation efficiency greatly.

In addition, iQIYI has also developed numerous functions with AI technology such as smart tag, smart clip and content recommendation, contributing to the company's marketing and advertisement businesses and offering better experience for its users as well.

iQIYI has been leading the Chinese entertainment industry by committing itself to smart technologies and their application in content production, innovation in marketing and business model development since 2010.

Latest statistics from China's marketing consulting firm iResearch in September shows iQIYI remains a leader in both mobile and PC video markets. iQIYI app has been installed in 541 million mobile devices including cellphones and tablets by the end of September. The app was used 17.8 billion times by users who spent combined 6.1 billion hours in September.

In terms of the PC market, iQIYI reached 380 million users during the month who accessed to the iQIYI site via personal computer and they spend 2.1 billion hours in total, according to iResearch.