BEIJING, April 18, 2019 /PRNewswire/ -- iQIYI, Inc. (NASDAQ: IQ) ("iQIYI" or the "Company"), an innovative market-leading online entertainment company in China, today released the performance results of two acclaimed films distributed under its revenue sharing model (the "Model"): joint-Thai, Chinese and U.S. production Triple Threat and Indian film The Man Who Feels No Pain. Under iQIYI's revenue sharing model, part of the proceeds generated from paid subscribers are shared directly with production houses. Both films were released quasi-simultaneously on iQIYI's online video-streaming platform and in movies theaters internationally. This allowed the company to shorten the conventional distribution window, providing Chinese audiences with access to quality content within days of the films' premiere. As of April 14 2019, the accumulated viewership for the two films have exceeded one million views and the online sharing revenue of Triple Threat has exceeded RMB 10 million, which is six times greater than the revenue generated by the Chinese box office. Functioning on its paid-membership system, the exclusive distribution of foreign and sino-foreign movies through the model demonstrates how the company is using diverse business models to widen its influence on the global film industry. 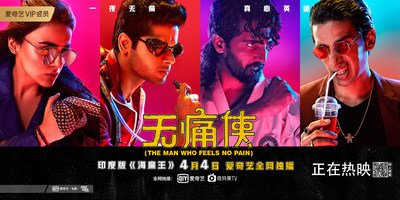 Triple Threat, an action thriller about a team of mercenaries who help a billionaire's daughter bring down a major crime syndicate, premiered on iQIYI on March 29. This was followed by the exclusive premiere of The Man Who Feels No Pain in the China market through iQIYI's streaming platform on April 4. The film, which tells the story of a young man who has a rare condition called congenital insensitivity to pain and his quest to vanquish his foes, had won the People's Choice Award for Midnight Madness at the 2018 Toronto International Film Festival ("TIFF"), which was India's first-ever entry into the this segment. Given that TIFF awards are selected by audience votes instead of a judging panel, winning the award is a great testimony of the market's approval and favorability of the movie and are often considered as the harbinger for other awards, such as the Academy Awards, that would ensue.

The release of both films represents iQIYI's continuous efforts to bring to its subscribers the best quality content from around the world by shortening the distribution windows. It also shows international production houses' recognition of iQIYI's strong position in China's online film industry. In addition to licensed online series and self-produced productions, iQIYI initiated its innovative model for revenue sharing in 2014, which has been of great success for both iQIYI and its partners, partially due to wide acceptance of the model by different parties within the industry. In 2018, each of the 25 online movies which were released on iQIYI's platform under the model achieved shared revenues of over RMB 10 million, representing a year-on-year increase of 34% on the total online shared revenue. Notably, the 2018 Chinese movie The Ferry Man: Manjusaka released under the model achieved a shared revenue RMB 45 million. In addition, iQIYI released 116 online dramas under the model in 2018, of which costume drama Buried City to Shut All Lights exceeded RMB 30 million in shared revenue.

"I'm pleased to see the strong results of the two films", said Yang Xianghua, President of iQIYI's Membership and Overseas Business Group, "Under this unique incentivization model, iQIYI is able to introduce even more premium quality content to our users. We will continue to promote this audience-oriented business model and I look forward to working with more content partners both from China and overseas."

"As China's leading online entertainment platform, iQIYI's incredibly large subscriber base has led us to see remarkable results with this partnership under its revenue sharing model. The online release also allows us to receive consumer feedback in a more efficient manner, allowing us to incorporate the most relevant market trends into future productions at once", said Elliot Tong, Managing Director of Autumn Sun Company Ltd, international distributor of The Man Who Feels No Pain. "This is a prime example of innovative integration between the traditional film industry and the paid-membership business model."