BEIJING, Feb. 20, 2019 /PRNewswire/ -- iQIYI, Inc. (NASDAQ:IQ) ("iQIYI" or the "Company"), an innovative market-leading online entertainment service in China, today announced that its original crime drama "Burning Ice" has begun its broadcast run on BS TWEIIV (BS12), a Japanese TV station. Shown on the channel at the primetime slot of 7pm every Friday, the broadcast represents the first time a Chinese crime drama has been acquired by NHKEP for distribution in Japan through a mainstream local Japanese TV channel. The show's broadcast on BS12 follows its previous distribution outside of mainland China on Netflix and on OTT platform HMVOD in Hong Kong. 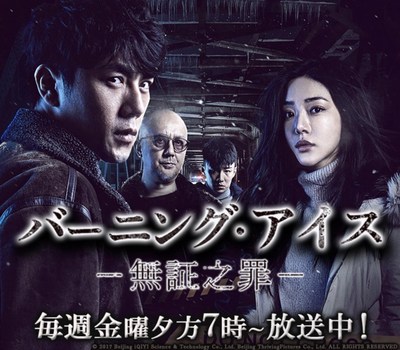 "The maturity of Japanese TV market in terms of both the quality and quantity of the country's self-developed crime drama is exceptionally high, which makes iQIYI's successful distribution of 'Burning Ice' to Japan an even greater achievement," said Chen Xiao, Vice President of iQIYI. "We're delighted to have the opportunity to share iQIYI's premium video content with greater numbers of viewers outside mainland China, as the popularity of Chinese dramas continues to surge overseas."

"Burning Ice" is adapted from the crime novel under the same name by Chinese author Zijin Chen, with a complex plot exploring the psychological states of its characters and the motivations behind their crimes. The series was produced by Dai Ying, Vice President at iQIYI who heads up the company's original drama division, and executive produced by the renowned producer Han Sanping. Directed by industry newcomer Luxing, the show stars Qin Hao, Deng Jiajia, Dai Xu and Wang Zhen'er.

iQIYI original drama are increasingly being embraced by audiences outside China, with iQIYI content including "The Mystic Nine", "Tientsin Mystic" and "Ghost Blows Out the Light - Finding Hu Bayi" having also been selected for broadcast in overseas markets. Japanese channels previously broadcast iQIYI's megahit costume drama "The Story of Yanxi Palace", and Japan's viewers will soon be able to enjoy a greater range of iQIYI content including "With you", "Summer's Desire" and "Tang Dynasty Tour".