BEIJING, Nov. 5, 2018 /PRNewswire/ -- iQIYI Inc. (NASDAQ: IQ) ("iQIYI" or the "Company"), an innovative market-leading online entertainment service in China, today announced the release of China's first vertical video drama series Ugh!Life!, which is set to premiere on November 26. The release of the show, a comedy consisting of 48 episodes of 3 minutes, is a part of iQIYI's strategy to begin producing professional level content design for portrait mode viewing on mobile devices. 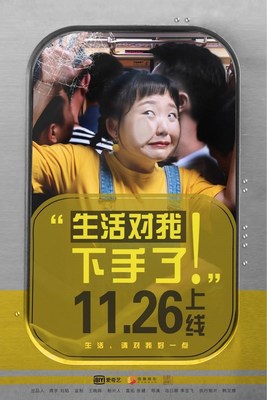 Watching video content on mobile devices is increasingly becoming the norm rather than the exception, with entertainment content producers and platforms globally striving to adapt to these new viewing habits. As such, "vertical video", referring to video content designed to be watched using a phone's vertical portrait mode, has become a hot topic across the entertainment industry. With the release of Ugh! Life! and last month's vertical short video stand-up comedy megagame, iQIYI is the first entertainment service in China to significantly invest in this disruptive new format.

"We are thrilled to announce the premiere of our vertical video drama series Ugh! Life!, which we believe is one of our most innovative projects yet," said Fu Tuo, Chief Producer of iQIYI Wright Studio. "With this project, iQIYI is not only offering our viewers a fresh new format but transforming the traditional approach to online content consumption, pushing forward development in the Chinese online entertainment industry."

At iQIYI's iJOY conference in Shanghai earlier this month, iQIYI CEO and founder Gong Yu stated that according to research, 70% of users view content on their phone in portrait mode. Dr. Gong predicted that the vertical video will soon become a mainstream method of content consumption, changing from being confined to largely grassroots, user-made video and expanding to include professional level content.

As a leader in China's entertainment industry, iQIYI is committed to innovating not only in terms of content matter but also in the way that content is presented. Recently, the company announced that going forward it will focus its effort on online dramas which total 12 episodes or less per season, a format shown to increase user loyalty. A previously produced online drama, Burning Ice, which has 12 episodes per season, was released last year by iQIYI to critical acclaim, being selected for distribution by Netflix and being recognized with an award for "Best Chinese Online Drama" at Chinese American Film and TV Festival.