BEIJING, July 16, 2018 /PRNewswire/ -- iQIYI Inc. (NASDAQ: IQ) ("iQIYI" or the "Company"), an innovative market-leading online entertainment service in China, today announced total shared revenue figures for online movies shown on its platform during the first half of 2018. The figures show that as of June 30 this year, the top 10 movies on iQIYI's online platform took in a total shared revenue of over 180 million RMB, which would amount to a box office revenue of 540 million RMB if it were in the offline cinema market. 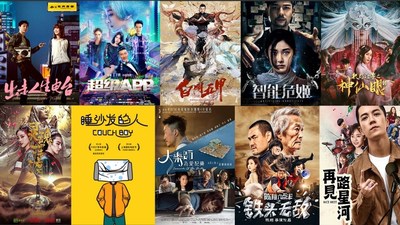 The figures released by iQIYI show that June 2018 has been a particularly strong month for online movies on iQIYI's platform. The total shared revenue of the top ten newly released movies on the iQIYI platform this June was 71.87 million RMB, representing a 260% increase on the 19.95 million RMB in online movie shared revenue attained on the iQIYI platform in June of the preceding year.

One of the online films first shown on iQIYI's platform this June was "Chen Xiang at Half Past Six: The Unbeatable Iron Head," a comedy movie which reached 23.58 million RMB in revenue just 20 days after its release. Other high earners this June include fantasy film "Mysterious Raiders" which achieved a shared revenue of 12.84 million RMB within 17 days of release and action film "Raging Flower" which had a total shared revenue of 9.62 million RMB 30 days after its release.

2018 is looking to be a milestone year for the Chinese online movie industry, with the number of high income movies already greater than was the case over the whole of last year. A report on the online movie industry showed that in 2017, 10 online movies attained shared revenue of over 10 million RMB, led by the mythical epic film "Winning Buddha," with a shared revenue of 26.55 million. Conversely, in the space of just half a year, in 2018 there have already been 11 online movies which have grossed over 10 million RMB in shared revenue. Historical costume drama "The Ferry Man: Manjusaka" was released in February 2018 and has already accumulated 42 million RMB in shared revenue, with a revenue size and popularity comparable with films shown at the same time in traditional cinemas.

Over the last few years, online movies have emerged as a new force within the Chinese film industry and are gradually becoming the one of the most popular forms of video content for Chinese internet users. Online movies possess advantages over box office movies in ways such as access to high user traffic, relative ease of distribution and publicity, as well as deriving benefit from the 'long tail'. The size of the market has grown from the point where just 450 online movies were made in 2014 to over 1800 different online movies being released over the course of 2017.

"iQIYI's innovative shared revenue model ensures that incentives between producers and platforms are congruous and has been sown to produce excellent results", said Yang Xianghua, Senior Vice President of iQIYI. "iQIYI will continue to show our commitment to the online film industry's development and are excited to work closely with all those who are contributing to its fantastic growth, be it through licensing agreements or through sharing revenue with producers."