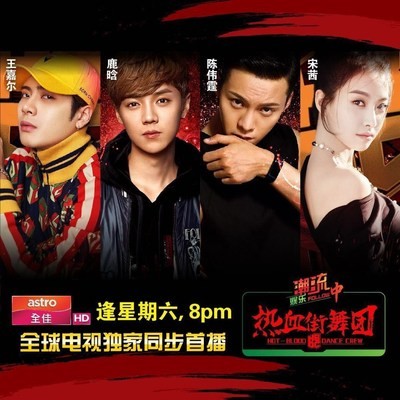 BEIJING, April 26, 2018 /PRNewswire/ -- iQIYI, Inc. (NASDAQ: IQ) ("iQIYI" or the "Company"), an innovative market-leading online entertainment service in China, announced that Astro, Malaysia's leading cross-platform media company, has obtained the rights to iQIYI's hit dance show "Hot Blood Dance Crew" as well as a number of other shows and dramas produced by iQIYI through a new collaboration between the two companies. "Hot Blood Dance Crew" is the first original Chinese online variety show to be simultaneously broadcast on both domestic and overseas platforms. Due to its high production quality, the show has enjoyed huge popularity among Malaysian audiences since its debut and currently ranked the third most popular reality show on Astro Quan Jia HD. Astro has fully deployed its marketing resources in support of the show, including promotions on social media, online platforms and offline advertising. The show has also attracted extensive local media coverage for the past month. According to Astro, 'Hot Blood Dance Crew', which premiered on March 17, has been the most heavily promoted Chinese internet reality show by the platform this year.

Astro commented that in recent years China's online video streaming and entertainment industries have made tremendous progress in terms of production quality and are increasingly an important source of premium content for overseas media platforms.

"We are very excited to cooperate on this partnership with Astro, Malaysia's leading cross-platform media company," said Chen Xiao, Vice President of iQIYI. "As our portfolio of high-quality, youth-focused entertainment products grows and develops, we look forward to bringing more premium content to audiences around the world."

"Hot Blood Dance Crew" was created by the iQIYI in-house production team behind "The Rap of China," the rap talent show that became a phenomenon in China last summer, racking up over 2.7 billion views.

In the first quarter of 2018, iQIYI launched another highly successful reality show, "Idol Producer", which reached a record-breaking 100 million views within the first hour of going live, and 2.83 billion views when the final episode was shown in early April.

Beyond "Hot Blood Dance Crew," iQIYI has an exciting slate of upcoming shows including new seasons of hit shows including "Qipa Talk", "S-style Show" and "Fantastic Baby", all of which are expected to be exported to overseas markets as well.