BEIJING, May 30, 2018 /PRNewswire/ -- iQIYI, Inc. (NASDAQ:IQ) ("iQIYI" or the "Company"), an innovative market-leading online entertainment service in China, announced that The Rap of China, its hit rap competition reality show, has expanded its scope beyond China with more than 10,000 hopeful contestants signing up from across Asia, North America and Australia, attracting attention from international media and social platforms.

The show's North America round of competition, which was taped in Los Angeles earlier in May, was judged by Grammy Award-winning American rap trio Migos as guest producers as well as China's pop singer Kris Wu and Chinese American rapper MC Jin as producers. It welcomed a variety of Chinese-language rappers, including North Americans of Chinese heritage, Chinese university students, and even foreigners who speak Chinese. 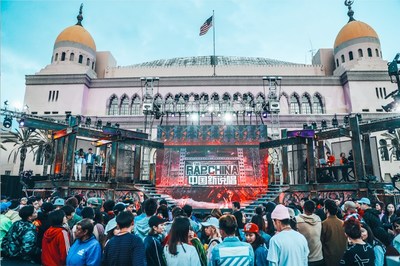 iQIYI’s original reality show "The Rap of China" attracted a large number of rappers at the North America round of competition in Los Angeles in May, 2018

While many contestants rapped in Mandarin, some performed in Southwestern Chinese dialects or ethnic minority languages, each bringing their own distinctive flavor. Aside from technical skill, contestants were judged based on their ability to convey a youthful voice and fresh ideas through their lyrics.

Images featuring the star producers and candidates in the Los Angeles competition were circulated widely on Twitter, Instagram and other social platforms, and attracted no shortage of attention from mainstream foreign media.

The social media hype has also spread rapidly from overseas to domestic online communities, with the hashtags #MeetKrisWu and #TheRapofChina shooting to the top of Weibo's list of trending topics. The show's North America round has also been covered by a variety of high profile Weibo KOLs, including those catering to overseas Chinese and focusing on entertainment and music.

"We're delighted to see The Rap of China generate such a huge reaction in America, which shows the bright prospects for Chinese-language rap's first attempt to break into the international market," said Chen Wei, senior vice president of iQIYI and executive producer of The Rap of China. "The youthfulness and vigor of the contestants in the North America round are showcasing the appeal and power of Chinese rap, allowing Chinese culture to spread abroad and enjoy mainstream success."

One of iQIYI's most popular reality shows with young viewers, The Rap of China features an all-star team of producers, including heartthrob Kris Wu, Taiwanese musician Chang Chen-yue, rap artist MC Hotdog, and pop singers Wilber Pan and Gloria Tang Tsz-Kei. With the theme of "I'm young and I rap," the show seeks to bring the charm of Chinese language rap to an international audience. In addition to its North America competition round, the show also held preliminary competition rounds in Malaysia and Australia.

12 Chinese New Year superstitions to follow for a big dose of luck
5 style tips inspired by local actress Zoe Tay
Relationship advice: My BF still uses dating apps. How should I talk to him about it?
Free activities in Singapore this weekend: CNY Bazaars, Taiwan's Ningxia Night Market & more

These are the trending colours to use in your home in 2020
Your spring cleaning checklist for CNY 2020
Tips and tricks to maintain your sofa
House tour: A modern luxe apartment with a 4.27m-high ceiling at Faber Walk