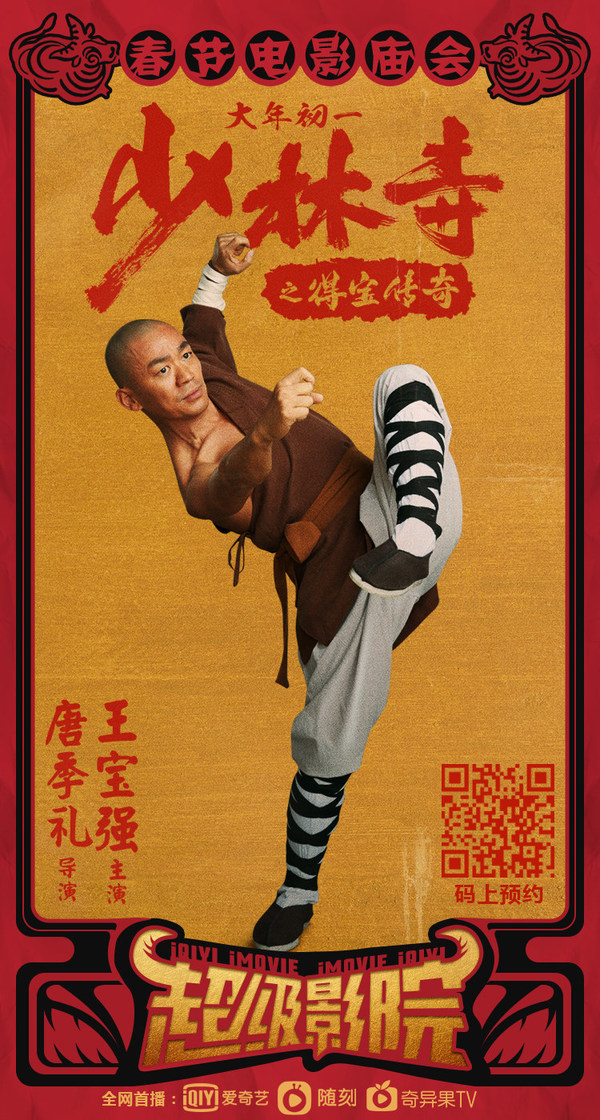 "We hope that Shaolin Master can win favor with our audience as previous PVOD titles have. Going forward, iQIYI's Ultimate Online Cinema section will continue streaming a slate of high-quality films, providing premium new offerings for our subscribers. At the same time, we also hope that the PVOD mode will achieve sustainable development, as we work with platforms and creators to build a healthy online film ecosystem where filmmakers can identify their clients, guarantee their incomes, and seize exciting new opportunities," said Song Jia, Vice President of iQIYI and General Manager of iQIYI Film Business Center.

In the Stanley Tong-directed film, Wang Baoqiang plays the role of Ximen Debao, an inn-keeper with no ambition. The film tells the story of how Ximen Debao who was framed for crimes, being trained with an eminent monk to prove his innocence. In recent years, Wang has successfully portrayed a number of impressive comic roles in a series of well-received and lucrative blockbusters such as Lost in Thailand and Detective Chinatown. In this new film, Wang has cast off his stereotypical image of "comic actor" and transformed into an orthodox warrior monk of the Shaolin Master.

PVOD mode, a new favored option for filmmakers and studios

In 2020, the PVOD mode became a new avenue for film distribution worldwide as movie theaters were closed due to the Covid-19 pandemic. In the Chinese market, iQIYI launched the action comedy film Enter the Fat Dragon last February via PVOD, allowing its subscribers to enjoy a new theatrical film at an affordable price in the comfort of their own homes. In doing so, iQIYI took the lead among Chinese video streaming platforms in exploring the PVOD mode.

In the past year, more than 10 films have been released on the iQIYI platform through the PVOD mode, including Spring Tide, Dwelling in the Fuchun Mountains, Knockout, and Double World. The online distribution of high-quality theatrical films has quickly covered a wide range of genres. Based on the runaway success of the mode, the Company launched its Ultimate Online Cinema section in July 2020 to promote a systematic PVOD-based cooperation with filmmakers.

Currently, not only have the films on iQIYI's Ultimate Online Cinema received revenue directly from subscribers, but they have also achieved widespread acclaim from the industry. Spring Tide was nominated for Best Feature Film and Best Director at the 33rd Golden Rooster Awards. Dwelling in the Fuchun Mountains was selected as one of the top ten films of 2020 by the Cahiers du Cinéma, a famous French film magazine.

During the 2021 Spring Festival season, iQIYI, together with several other video streaming platforms will release Shaolin Master through the PVOD mode. Through these initiatives, iQIYI is working with a growing number of filmmakers and platforms to create good content, accelerating the development of Direct-to-Consumer in the film industry and building a broader distribution model for filmmakers.