MACAU, Oct. 23, 2018 /PRNewswire/ -- JIGSAW International Music Festival returns to Macau on 8 December 2018 to bring audiences a night of world-class DJ performances, headlined by the legendary Steve Aoki, and the latest in electronic dance music from around the globe. Last year, the inaugural festival drew a crowd of 10,000 people, with 100,000+ tuning in to the festival online via live broadcast. 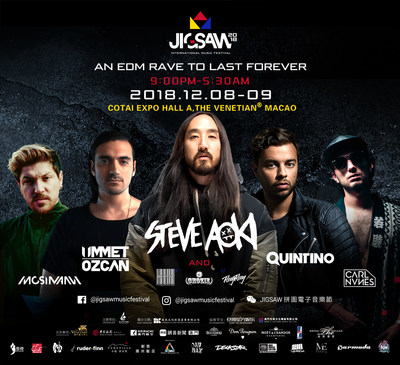 This year's event, organised by Elite Fun Entertainment Limited, will take place at The Venetian Macao Golden Light Exhibition Hall A from 9 PM to 5 AM, and will feature some of best in the international DJ scene. Headlining the festival will be Steve Aoki, who will perform alongside high-profile names such as Quintino, Ummet Ozcan, Carl Nunes, Quentin Mosimann, as well as Binary, DJ Chozie and DJ Rayray.

For JIGSAW International Music Festival 2018, organisers are working with a renowned stage production team to use creative stage design and lighting effects to put together the ultimate immersive and visually-inspiring EDM experience under the theme of "Future. Tech. Music". The event space, which can hold up to 10,000 people, has a unique central dance floor that extends across the hall, allowing audiences to get as close to the stage as possible. The dance floor is lined with VIP booths, offering a diverse selection of fine wines and snacks to truly create a music festival experience like no other.

Elite Fun Entertainment Limited said, "We plan to make JIGSAW International Music Festival into one of the landmark music extravaganzas in Macau, attracting electronic dance music lovers from across Asia, including Macau, Hong Kong and the Mainland China region, to be a part of this movement. With JIGSAW, we have devoted ourselves to creating a diversified music and arts festival that brings together the unique styles of high-profile performers as well as rising stars in the international music scene. We hope to promote cultural integration, and bring a more creative and cultural experience to the city."

Headlining JIGSAW International Music Festival 2018 is none other than the Grammy-nominated producer and DJ, Steve Aoki. The Miami-born musician currently is #9 on the Top 100 DJs ranking by DJMAG and has collaborated with a long list of famous artists that include Daddy Yankee, Linkin Park, Fall Out Boy and more recently, Louis Tomlinson on the hit single, "Just Hold On". Aoki tours over 200 international shows and music festivals annually, including Tomorrowland and Ultra Music Festival, and will surely bring the heat to the JIGSAW stage.

Also performing at JIGSAW 2018 is Dutch DJ and producer Quintino, who burst into the global dance music scene in 2011, when he released his album with Sandro Silva, Epic, which went platinum, setting the foundation for his successful career as an international DJ. He quickly jumped from #80 on DJMAG's list of TOP 100 DJs in 2016 to #32 in 2018, with major tracks "Freak" and "I Just Can't" crossing over 40 million views online.

Another high-profile name to appear in the JIGSAW 2018 line-up is Ummet Ozcan, whose hits include "Raise Your Hands", "Smash" and "Superwave". He has performed at major EDM festivals around the world such as Electric Daisy Carnival, Creamfields and Global Gathering. Carl Nunes, one the most influential DJs from Latin America, and Quentin Mosimann, #93 in the world according to DJMAG's Top 100 DJs, will also be taking over the JIGSAW stage this year. These performances will be supported by the also much-anticipated warm-up DJs, including Binary, DJ Chozie and DJ Rayray. With such a hard-hitting line-up, JIGSAW International Music Festival 2018 is setting out to be an unmissable night for EDM fans in Asia and around the world.

In celebration of the 2018 Macau International Start-up Week, a limited number of discounted Early Bird tickets for JIGSAW International Music Festival 2018 were on sale from 20-22 September 2018. Official ticket sales will begin in mid-October. Further details will be announced soon.

JIGSAW International Music Festival, led by Elite Fun Entertainment Limited, combines the best of music and stage production with a passion for electronic dance music (EDM). The inaugural festival took place in November 2017 and was attended by at least 10,000 festival-goers. JIGSAW seeks to create a unique festival experience for EDM lovers that promises the hottest international artists and elements that reflect the culture of the region as well as the latest trends in EDM.

Elite Fun Entertainment Limited is a one-stop-service entertainment production company operating out of Greater China. With their extensive industry expertise and network, the company is the go-to for clients across various industries looking for the best service, quality and production value in exhibitions and events. The company has successfully led concerts and other entertainment projects involving A-list performers from Hong Kong, Taiwan and Korea, managing all aspects from venue liaison to advertisement production to talent sourcing and more.