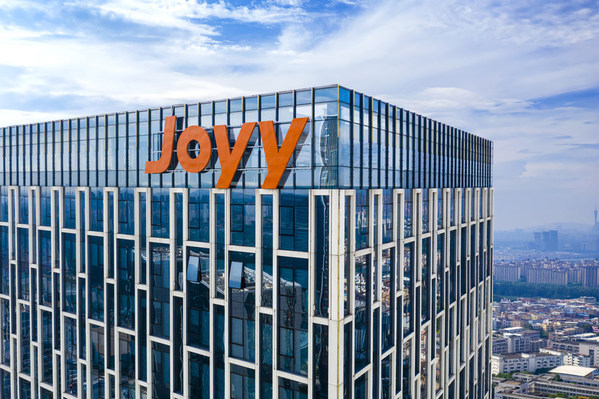 David Xueling Li, Chairman and CEO of JOYY, commented, "Despite the recent volatility in the macro environment and the increased uncertainty due to COVID-19, our persistent execution of our globalization strategy helped us achieve substantial progress on multiple fronts. In the past quarter, our efforts of enhancing our diversified and localized content ecosystem have helped Bigo Live further expand its product reach and user base, while continuing the cultivation of talented content creators and effectively increasing engagement levels in Likee's content community.

"Furthermore, through the combination of improved synergy among various products, enhanced operating leverage, and prudent marketing strategy, we have achieved a steady expansion in profitability for the entire group," Mr. Li concluded.

Net revenues increased by 21.7% to US$650.5 million in the third quarter of 2021 from US$534.4 million in the corresponding period of 2020, primarily driven by the growth of livestreaming revenues from BIGO.

During the past quarter, the Company continued to cultivate its global diversified content pool and effectively expanded the reach of its global live streaming product.

Bigo Live has achieved an increase in MAU by 10.7% year over year to 31 million in the third quarter of 2021. Through various cross-industry collaborations and a series of localized operational activities, the Company broadened Bigo Live's talent pool of content creators and expanded its localized premium content library, covering a number of categories including pan-entertainment, gaming, and lifestyle. In the lifestyle category, Bigo Live made its initial foray into e-commerce live streaming in Southeast Asia and launched its Bigo Market Place channel in Indonesia, Malaysia, and Thailand, further expanding Bigo Live's product outreach by providing a diversified interactive experience for its users. The Company also introduced several innovative product features leading to improvements in user engagement on Bigo Live. As a result, the number of streamers for multiuser chatrooms increased by 2.3% and the average duration per live streaming session increased by 5.3% sequentially in the third quarter.

For the fourth quarter of 2021, the Company expects net revenues to be between US$652 million and US$661 million, representing a year-over-year growth of 14.7% to 16.3%. This guidance excludes the revenue contribution from Huya and YY Live in the same period of last year. This forecast considers the potential impact of the COVID-19 pandemic and reflects the Company's current and preliminary views on the market and operational conditions, which are subject to changes, particularly as to the potential impact of the COVID-19 on the global economy and users' paying capabilities.

The share repurchases may be made from time to time in the open market at prevailing market prices, in privately negotiated transactions, in block trades and/or through other legally permissible means, depending on market conditions and in accordance with applicable rules and regulations. JOYY's board of directors will review the share repurchase plan periodically, and may authorize adjustment of its terms and size. The Company expects to fund repurchases made under those plans from its existing funds.

About JOYY Inc.
JOYY is a leading global social media company that enables users to interact with each other in real time through online live media. On a mission to connect people and enrich their lives through video, JOYY currently operates several social products, including Bigo Live for live streaming, Likee for short-form videos, Hago for multiplayer social interaction and entertainment, and instant messaging product and others. The Company has created a highly engaging and vibrant user community for users across the globe. JOYY was listed on the NASDAQ in November 2012.