- Preferring convenient eating in Asia vs. Preferring natural taste in the United States and the Middle East, the influx of young people increases due to high interest in healthy products 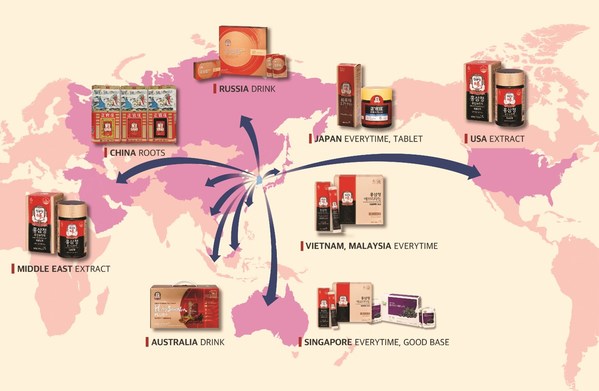 'Everytime', a stick-type red ginseng product that is easy to carry and eat, ranked first in sales in six Asian regions, including Japan.

As red ginseng, the originator of K-food, has established itself as a popular gift in Asia where New Year's holidays are celebrated, demand in overseas markets is also increasing. Growing interest in health worldwide, as well as increasing awareness due to the influence of K-drama, seems to have driven the market due to an increase in the influx of the younger generation. The diversification of sales channels through e-commerce along with product variation also had an impact.

The overseas export performance of KGC, Korea's leading red ginseng manufacturing company, is also remarkable. Compared to the annual sales in '19, before the outbreak of Covid-19, '20 increased by 4.8%, and the accumulated sales in the third quarter of '21 also increased by about 20% compared to '19's annual sales.

<'Everytime', which is easy to carry and eat, ranks first in sales in 6 Asian countries including Japan>

'Everytime' is a product made with 100% red ginseng concentrate and only purified water, and the name is given to include 'easy to carry and eat everytime'. 'Everytime' ranked first in sales in six Asian regions including Japan last year.

In the past, red ginseng tablets in the form of pills were sold a lot, but recently, the younger generation, who have often seen eating stick-type red ginseng through Korean dramas, are enjoying this more and more.

"Red ginseng is a cultural pride of Korea and a significant legacy passed down by our ancestors," said Kim Nae-soo, a director of Global CIC at KGC. He added, "We will do our best to promote our red ginseng to the world with a sense of duty as a representative."