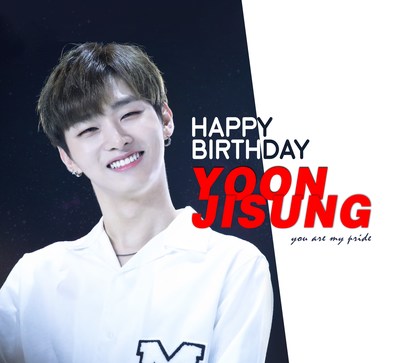 Congratulations on Yoonjisung’s birthday, my dear artist, who will bloom forever

Yoon Ji Sung is a member of the new group Wanna One, which debuted in 2017. He appeared on the competition program "Producer 101 Season 2," which selected 11 members of Korean idol groups, and confirmed his debut as the 8th most successful artist at the end of the season.

Yoon Ji Sung  is loved by many fans for his excellent music and wit. Also, he is aware of his fan club members and supports them as a leader.

Meanwhile, his group Wanna One debuted last August. They have topped music broadcasting and held the K-pop chart top spot for the longest time. Their debut album has sold millions of albums and won various "Best New Artist" awards.

Wanna One has topped the charts for major Korean music companies, topped the list of music companies with the songs "Maximum Hour First" and "Million Sales" from their debut album, and swept the Rookie of the Year award ceremony with a bold face.

According to Reflect J, Yoon Ji Sung's birthday ad is run by fans who want him to be a global artist and who hope to celebrate his 28th birthday all together. The gift is made in the hope that Yoon Ji Sung will become a more successful artist in 2018.