SEOUL, South Korea and NEW YORK, Jan. 29, 2018 /PRNewswire/ -- Korean idol, Lee Dae-hwi, appeared in an advertisement at Times Square in New York on January 28 ET. Lee Dae-hwi, a member of the new group Wanna One that debuted in 2017, appeared on Mnet's 'Productions 101 Season-2,' featuring 11 members of the Korean idol group, and confirmed their debut as one of the most successful artists at the end of the season.

He was highly regarded as an idol when he appeared on the survival program at the age of 17 and performed his own composition, 'Hollywood,' on the first stage. Since then, he has gained huge popularity by performing excellent interpretation of songs on every stage.

He also received huge acclaim from trainers for his ability to compose and write lyrics and songs. He has received an overwhelming endorsement from those who are also his seniors in the entertainment industry as a star to keep an eye on.

Meanwhile, his group Wanna One debuted last August, They have always topped music broadcasting and held the K-pop chart top spot for the longest time. Their debut album has sold millions of albums and won various "Best New Artist" awards.

Wanna One has topped the charts for major Korean music companies, topped the list of music companies with a record of "Maximum Hour First" and "Million Sales" for their debut album, and swept away the Rookie of the Year award ceremony with a bold face. 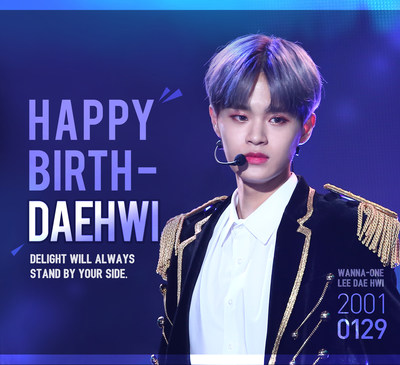 DELIGHT is looking forward to your promising future, our K-pop superstar Dae-hwi.

Lee Dae-hwi's fan club, DELIGHT, celebrated his birthday by advertising on New York Times Square in 2018 for the new year of growth, the golden anniversary of his debut, and his 18th birthday on this day. The three words 'LEE DAE HWI' on Times Square in New York City is seen as a shining image by fans who want to be global artists.