KUMAGAYA, Japan, Sept. 10, 2019 /PRNewswire/ -- Kumagaya City, the host of three rugby matches for the upcoming tournament in September and October, is celebrating the occasion with a special variety of a famous shaved ice dessert known as Yukikuma. 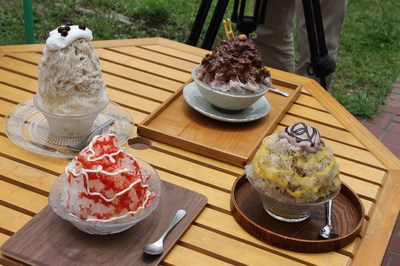 Yukikuma is available in 32 stores across Kumagaya City, including a limited-edition, rugby-themed version called the "TRY." Available at a store called Mikawaya, this special shaved ice dessert has been created to commemorate Kumagaya's role as a host city.

The "TRY" is a mountain of fluffy ice topped with a ball-shaped almond and cookies to make up the goalposts--and is about as adorable as a dessert can get.

In Japanese, yuki means snow, and freshly fallen snow is exactly the texture of this delicate dessert. Yukikuma is made by shaving clear ice with special techniques. Some vendors serve it with fresh fruit while other variations include chocolate, strawberry fromage (cream cheese), green tea and caramel, and coffee, just to name a few.

Making the ice fluffy like snow requires a very high skill, especially in shaving the ice. The shaved ice dessert can be classified as Yukikuma called if it meets three conditions:

1. The ice must be made from water in Kumagaya.

2. The texture of the ice must be fluffy like snow.

3. Original syrup or ingredients must be used.

After the final product clears those conditions and passes a quality inspection test by Kumagaya city, Yukikuma can be sold in any retail outlet, including the rugby stadium.

For more info on stores that sell Yukikuma, see: http://www.city.kumagaya.lg.jp/atsusataisaku/anyone/yukikumaindex/yukikuma.html