- LINE FRIENDS initiates its 'FRIENDS CREATORS' project this year with Roy Wang, the first Chinese celebrity to join the project 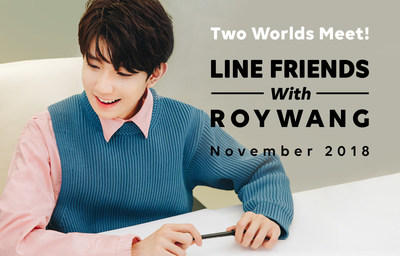 As the first Chinese celebrity to participate, Roy Wang joined the second round of the 'FRIENDS CREATORS' project following after BTS. Lending his expertise as an artist, Roy Wang created a series of characters with a new concept by pouring his bright and youthful energy into the project over the last six months.

The 'FRIENDS CREATORS' holds significant meaning as LINE FRIENDS's long-term and creative strategy to create a new kind of character IP business with the company's capabilities and assets in the character business, based on the creativity of global artists from different fields. The previous series 'BT21' character, which was created in collaboration with global boy band BTS, won enthusiastic attention from around the world.

At the age of 14, Roy Wang has started writing songs and released his first single entitled "Cause of You," which was both written and composed by himself for his fans. The song was officially released in January 2016 and has received plaudits with catchy lyrics. His post of this song on Weibo has been re-posted more than 400 million times. Recently, Roy Wang has released a total of 8 songs including, "Seventeen," "Sleep," "Proud," "The Song for You." Among them, he wrote three songs by himself.

Moreover, he was named by Time magazine as one of the "30 Most Influential Teens of 2017" for his appointment as UNICEF's Special Advocate for Education. Ever since his debut, Roy Wang has sought to spread his bright and positive energy and influence all over the world, excelling not only as a musical artist, but also as a talented actor.

"I was pleased to collaborate with LINE FRIENDS and participate in the entire process of creating new characters which are creating great expectation. My hope is that these new characters become a gift that brings joy and energy to fans and consumers around the world," said Roy Wang.

About LINE FRIENDS
LINE FRIENDS is a global character brand featuring 11 characters which were originally created for use as stickers for leading mobile messenger application LINE and its 200 million active worldwide users. The company has emerged as a global creator by introducing new Intellectual Property (IP) like BT21, characters created together with global boy band BTS and so on. LINE FRIENDS also has collaborated with a number of renowned brands including LAMY, Beats by Dre and Brompton, all aligned with the company's philosophy and values to showcase premium character products. More recently, LINE FRIENDS has operated 107 stores globally in a total of 11 markets worldwide, in fashion-leading cities such Seoul, Tokyo, New York, and Shanghai, and became an independent company in January 2015. For more information please visit www.LINEFRIENDS.com.