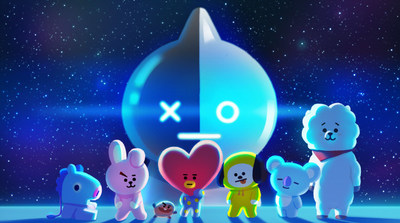 'BT21' characters created by LINE FRIENDS and BTS have been hugely popular, reaching more than 8 million downloads and exceeding 71 million exposures on Twitter only 10 days after launching.

LINE FRIENDS revealed a total of eight new BT21 characters, inspired by each individual BTS member with characteristics including personality, values and taste, through its LINE STORE and official BT21 social media channels. Only 10 days after being released on September 26, the characters have already recorded more than 8 million downloads and 71 million Twitter exposures. Moreover, the official social media channels for BT21 including Twitter (twitter.com/BT21_), Instagram, and YouTube have reached over 420,000 users, demonstrating its rapid growth in popularity. In fact, a number of fans from around the world have on their own created fan art pieces using BT21 characters, creating even more buzz.

The BT21 line of characters is the first output from LINE FRIENDS's new 'FRIENDS CREATORS' project, which focuses on creating new Intellectual Property (IP) with global artists. 'FRIENDS CREATORS' is LINE FRIENDS's long-term unique and creative strategy to create a new kind of character IP business with the company's capabilities and assets in the character business, based on the creativity of global artists from different fields.

The launch of the BT21 cast of characters is significant in that it marks the first time in the character industry that all of the members of a group have actively participated in the entire process of creating unique characters. BT21 members drew sketches and detailed the characteristics, preferences and values of each character in close collaboration with LINE FRIENDS, rather than simply creating characters with the physical appearance of the artists.

Based on the great popularity of the BT21 characters, LINE FRIENDS will release a behind-the-scenes video featuring BTS creating their BT21 characters and introduce a wide variety of BT21 merchandise and games later. In particular, LINE FRIENDS will showcase its BT21 products at its LINE FRIENDS flagship store in New York and a famous Korean luxury boutique 'Boon The Shop' in Seoul this coming December. The products will be available in Japan, Taiwan, Hong Kong and Thailand as well.

"BTS, the first artist to join the 'FRIENDS CREATORS' Project, clearly embodies the key LINE FRIENDS' philosophies - Global, Millennial and Trend. BTS is a modern storyteller who can share the story about the development of its characters and how they reflect each member's characteristics," said LINE FRIENDS. The company added, "LINE FRIENDS will continue to put its full efforts into collaborating with leading global artists to create new IP and content that will be loved by existing fans and even the younger generation in their teens and 20s.

A total of 14 episodes of behind-the-scenes clips about the development of BT21 characters will be released on October 17 through the official BT21 YouTube channel (www.youtube.com/BT21_official) and official website (www.bt21.com). The first episode is uploaded here: (https://www.youtube.com/watch?v=OCtCmqoP2RI)

BTS, a South Korean boy band beloved worldwide, is the first K-POP group to win the Top Social Artist Award at the Billboard Music Awards, and has broken records with pre-sales of its single "Love Yourself: Her" released last month.

About the BT21 Characters:

TATA, who was always curious about everything outside of his universe, decided to become a superstar on Earth after accidently landing there during his travels. He soon begins his journey with members RJ, CHIMMY, COOKY, MANG, SHOOKY and KOYA to become BT21, becoming a global superstar. And this is how BT21 begins.

LINE FRIENDS is a global brand featuring 11 characters which were originally created for use as stickers for leading mobile messenger application LINE and its 200 million active worldwide users. With signature characters such as Brown, Choco and Cony, LINE FRIENDS has collaborated with a number of renowned brands around the world, including LAMY, L'Occitane, Brompton and others. LINE FRIENDS has operated 87 stores globally in a total of 11 markets worldwide, in cities such Seoul, New York, Shanghai, and Tokyo. LINE FRIENDS became an independent company in January 2015. For more information please visit www.LINEFRIENDS.com.