SEOUL, South Korea, Aug. 1, 2017 /PRNewswire/ -- LINE FRIENDS, one of the world's fastest-growing character brands, today opened its first official U.S. store in the heart of New York City's Times Square. This flagship store marks the first time an Asian character brand has opened a large-scale store in the U.S., and signifies LINE FRIENDS' first permanent entry into the North American market as part of the company's global expansion efforts. LINE FRIENDS in recent years has opened a variety of concept stores in 11 countries around the world, in cities such as Seoul, Shanghai and Tokyo, and now New York. 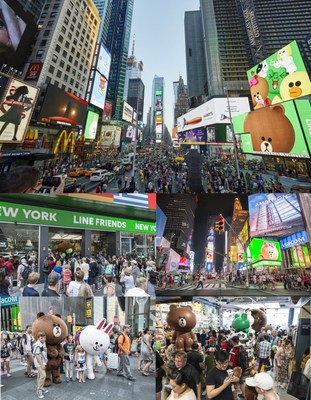 LINE FRIENDS, one of the world’s fastest-growing character brands, opens its flagship store in New York City on August 1, 2017

The LINE FRIENDS store in New York features a large-scale, 430-square meter (4,628-square foot) retail space, and sits at the prime location of 1515 Broadway which, as home to the world-renowned musical The Lion King, which attracts 330,000 visitors daily. The LINE FRIENDS New York flagship store aims to become a favorite destination for visitors from all over the world coming to New York's commercial center and entertainment hub.

The LINE FRIENDS New York store is not only a character merchandise store, but an entertainment space that offers a variety of experiences for visitors. The store allows people to see the unique personalities of main characters like Choco and Brown through themed rooms, and also to be wowed by "Mega Brown," an enormous version of the lovable bear which sits right in the middle of the store. The store will also offer more than 440 character items for sale, including 26 products exclusive to the New York store, as well as a series of Scandinavian-style collaborations. More than 30,000 people have already visited the store during its first pre-opening week starting on July 21, affirming the city's excitement and anticipation.

In celebration of the store's opening as well as the one-year anniversary of Line Corp's (ADR) listing on the New York Stock Exchange (NYSE: LN), LINE FRIENDS carried out a large-scale outdoor promotion using Times Square's LED screens to fill the surrounding area with the full range of LINE FRIENDS characters. In addition to the outdoor advertisements, digital signage on the store's exterior features this season's newest products and branded content to attract the attention of passers-by.

LINE FRIENDS had previously generated heavy public interest when it ran a pop-up store in New York City for three weeks in December 2014 at 1414 Broadway. At the time, New Yorkers also had an enthusiastic response to the LINE FRIENDS characters, with more than 300,000 people in total visiting while the pop-up store was open.

LINE FRIENDS characters have already won the hearts of top Hollywood celebrities and pictures from their visits to the LINE FRIENDS store have become a viral hit.

"The opening of our New York flagship store commemorates the one-year anniversary of our parent company's listing on the New York Stock Exchange, and paves the way for the official start of the next phase of LINE FRIENDS' global expansion," said LINE FRIENDS. "We see particular significance in the fact that characters which got their start in digital media, not cinema or TV, are making a such a bold entrance into New York City, the world's leader in cultural trends. With this next phase of our global expansion, LINE FRIENDS will continue to grow as a character brand that crosses international and cultural barriers to bring excitement and joy to people around the world."

LINE FRIENDS is a global brand featuring 11 characters which were originally created for use as stickers for leading mobile messenger application LINE and its 200 million active worldwide users. With signature characters such as Brown, Choco and Cony, LINE FRIENDS has collaborated with a number of renowned brands around the world, including LAMY, L'Occitane, Brompton and others. LINE FRIENDS has operated 84 stores globally in a total of 11 markets worldwide, in cities such as Seoul, New York, Shanghai, and Tokyo. LINE FRIENDS became an independent company in January 2015. For more information please visit www.LINEFRIENDS.com.

Based in Japan, LINE Corporation (NYSE:LN/TSE:3938) is dedicated to the mission of "CLOSING THE DISTANCE," bringing together people, information, and services. The LINE messaging app was launched in June 2011 and has since grown into a diversified global platform, operating a range of services and contents.