NEW YORK, Nov. 20, 2018 /PRNewswire/ -- LINE FRIENDS, one of the world's fastest growing global character brands, announced that it will join the (SHOPATHON)RED campaign launch on Amazon in an effort to support (RED)'s fight to end AIDS, along with global brands and influencers, from November 19 to December 31. 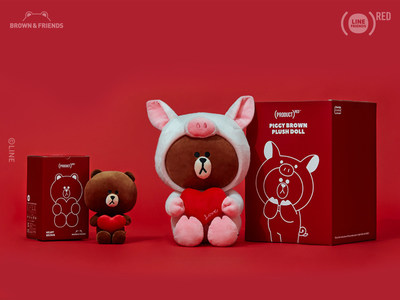 LINE FRIENDS, which has become a beloved character brand worldwide, is collaborating with (RED) for the first time this year. Throughout this partnership, the company will showcase two limited editions featuring the brand's iconic character BROWN holding a red heart: "(LINE FRIENDS)RED Piggy BROWN" and "(LINE FRIENDS)RED Heart BROWN." The design is specially curated in a (RED)-branded package to deliver the purpose and message of the campaign. LINE FRIENDS will contribute 15% of the purchase price from each product to the Global Fund, which uses the contribution to fight AIDS, Tuberculosis and Malaria as well as support HIV/AIDS funding in Sub-Saharan Africa. The products are availalbe on Amazon.com/RED.

(RED), a nonprofit organization, was founded in 2006 to engage businesses and people worldwide in the fight against AIDS. To date, (RED) has generated more than USD 500 million for the Global Fund and 100 percent of that money goes work on the ground.

"LINE FRIENDS is honored to partner with (RED) together with globally renowned companies to support AIDS," said LINE FRIENDS adding, "Throughout the campaign, we hope to deliver funds with a warm heart where help is needed most worldwide."

LINE FRIENDS has received great attention as a rising global character brand after expanding its distribution channel on Amazon Global. In addition to the (SHOPATHON)RED campaign, the company has engaged in various philanthropic activities such as a partnership with UNICEF to aid children around the world.

LINE FRIENDS is a global character brand featuring 11 characters which were originally created for use as stickers for leading mobile messenger application LINE and its 200 million active worldwide users. The company has emerged as a global creator by introducing new Intellectual Property (IP) like BT21, characters created together with global boy band BTS, in addition to Animation Running Man and Usamaru. LINE FRIENDS also has collaborated with a number of renowned brands including LAMY, Beats by Dr.Dre and Brompton, all aligned with the company's philosophy and values to showcase premium character products. More recently, LINE FRIENDS has operated 125 stores globally in a total of 11 markets worldwide, in trend-leading cities such as Seoul, Tokyo, New York, and Shanghai, and became an independent company in January 2015. For more information please visit www.LINEFRIENDS.com.

To date, (RED) has generated more than $500 million for the Global Fund to fight AIDS, Tuberculosis and Malaria, to support HIV/AIDS grants in Ghana, Kenya, Lesotho, Rwanda, South Africa, Swaziland, Tanzania and Zambia. 100 percent of that money goes to work on the ground -- no overhead is taken. Global Fund grants that (RED) supports have impacted nearly 110 million people with prevention, treatment, counseling, HIV testing and care services.