XI'AN, China, Oct. 27, 2021 /PRNewswire/ -- LONGi has announced a new world record of 25.82% for the efficiency of its commercial size HJT (M6 silicon-based heterojunction) solar cells, validated in testing carried out at the German Institut für Solarenergieforschung (ISFH). The new record follows the previous benchmark of 25.26% in June, also established by LONGi. 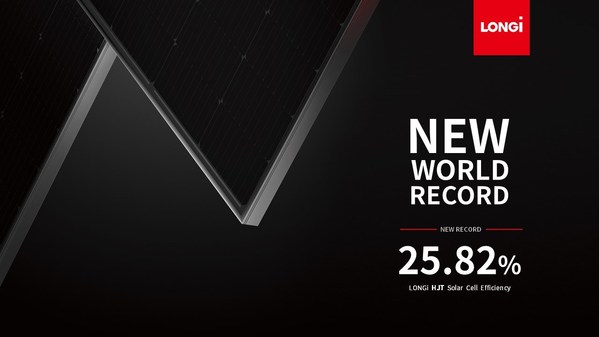 Research and development into HJT solar cell technology is an important focus for LONGi in its commitment to lead the global energy transformation with technological innovation. The two world records set within five months of each other underline the company's leading position in innovative high-efficiency solar cell technology and its vision to drive forward the sustainable and rapid development of the global PV industry.

LONGi's Cell R&D Center adheres to independent innovation in promoting the industrialization of new high-efficiency cell technology, in order to enable the upgrading of the entire industry. The company's annual R&D investment accounts for more than 5% of its sales revenue, allowing it to remain at the leading edge of innovation and progress in cutting-edge technologies, consistently setting new efficiency records.

Innovation is the core value of LONGi's product strategy and the company will continue to create greater value for customers and partners with more high-quality, reliable and high-efficiency products, to contribute to the achievement of China's dual goals of peaking carbon emissions by 2030 and carbon neutrality by 2060.