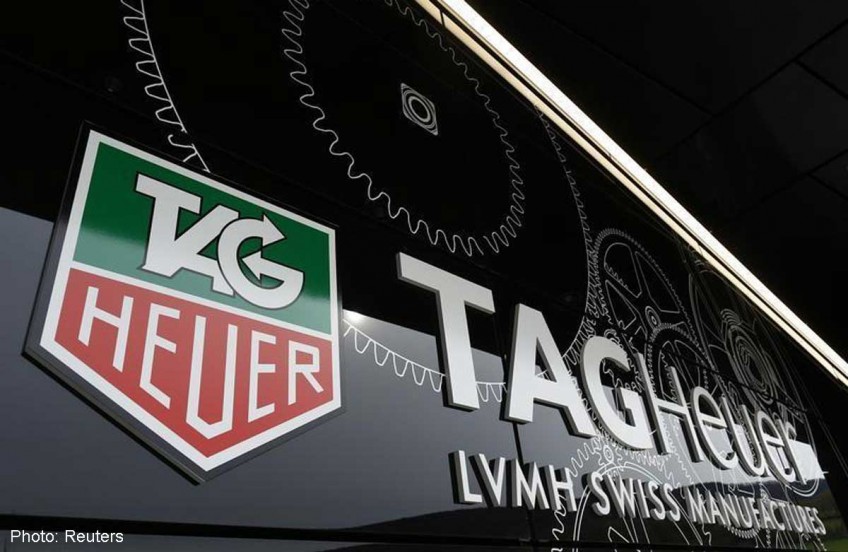 The Tag Heuer logo is seen at the entrance of their new watch manufactory in Chevenez November 5, 2013.

PARIS - The flurry of technology deals luxury watchmakers announced this week to tackle the Apple Watch threat are more a way to hedge their bets in case the smartwatch market takes off than a strategic U-turn.

The costs of development of these hybrid watches, combining elements of traditional watchmaking with digital know-how and wireless connectivity, will be mostly financed by the technology providers, industry specialists predicted.

Therefore, the partnerships unveiled at the Baselworld fair actually involve little investment for luxury brands - aside from their marketing efforts - but represent potentially high returns in terms of image and sales.

On Thursday, LVMH's Tag Heuer and Bulgari, and Kering's Gucci were among the more than dozen or so watch brands that announced partnerships with technology companies.

Regarding Tag Heuer's alliance with US chip maker Intel and Google unveiled on Thursday, independent financial analyst Richard Windsor said: "I strongly suspect that Intel and Google will be putting up the majority of the development costs of the product, which is expected to be launched before the end of the year."

Few details of the watch were provided such as its functions or price, and Tag Heuer Chief Executive Jean-Claude Biver acknowledged it was not yet clear whether gaining the "Intel Inside" also meant losing the precious "Swiss Made" label.

"Swiss brands like TAG are hedging their bets - just in case 'wrist computers' become popular and they are totally out of the game," said Exane BNP Paribas analyst Luca Solca.

But while the announcement helped Tag Heuer make headlines and project the image of a brand in tune with its times, the project has many limitations, and could, in fact, fail to ever yield a product, Windsor said.

Many luxury watchmakers, including Patek Philippe and Breguet, said this week smartwatches were incompatible with their brands' values and the timelessness of their products.

The industry is divided on whether there will be strong demand for smartwatches whether they are made by Apple, Samsung, Pebble or luxury brands.

The Apple Watch is due to go on sale on April 24 and will range in price from $350 to $17,000 for an 18-karat gold model, making the company's first foray in the personal luxury goods market.

But Apple has been taking more leaves out of luxury books than luxury brands have been using consumer electronics recipes.

The Californian computer company provided the first glimpse of its watch during Paris fashion week and photos were taken of designer Karl Lagerfeld and US Vogue editor Anna Wintour admiring it in the trendy Parisian shop Colette.

Yet, for many people, the Apple watch is the antithesis of a luxury product. A Cartier and a Rolex watch usually retains value or gains value in the second-hand market while Apple devices very quickly depreciate.

Bernstein luxury analyst Mario Ortelli said the tech industry "seems to be endeavouring to shape the world into an egalitarian utopia, with themes such as shared economy, and democratization of information until it is universally accessible (Google)".

Luxury goods companies, however, "are inherently exclusive and most of the desirability and value of their products is derived from the fact that not everyone can have it…or even afford it".

Windsor also noted it was not the first time Tag Heuer experimented with electronics as it introduced a mobile phone called Meridiist in 2008 which "eventually sank without a trace".