Majority of recent listings above water 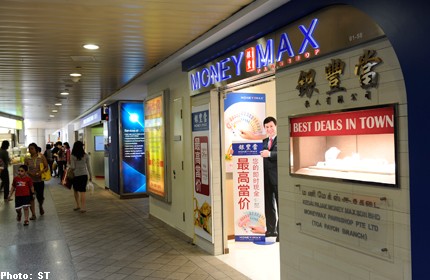 Pawnshop operator MoneyMax Financial Services (above) earmarked only two million shares for the public offer, or 2,000 lots, while fastener supplier PS Group Holdings did not even have a public tranche. This meant it was more likely retail investors would buy the shares from the open market after listing.

SINGAPORE - Most firms that have listed on the Singapore Exchange recently are trading above their initial public offering (IPO) price, reflecting the stability across the wider share market.

There have been nine listings since July 1 - three on the mainboard and six on Catalist.

Investment bankers and corporate lawyers said the market calm after the sharp falls in late May and June encouraged these firms to seize the window of opportunity to list.

And the continued stability has helped the newcomers to perform well since they made their debuts.

Six of the nine were above water as of Wednesday's market close, the last session of the shortened trading week. One was unchanged from the IPO price, while only two had dropped below.

The best performer was Catalist firm ISOTeam, which closed at 40 cents, 82 per cent above the IPO price of 22 cents.

Among real estate plays, mainboard-listed SPH Reit closed on Wednesday at 99 cents, 10 per cent above its IPO price of 90 cents. The shopping mall owner could have been boosted and supported by strong demand from institutional funds, say market watchers.

Those that have done well may have an attractive theme or story to attract investors, said AmFraser Securities remisier Alvin Yong.

"If the investing public likes the theme and the concept, it will further enhance the trading interest. Those without an interesting story are likely to be sidelined," he noted.

By contrast, Catalist-listed Singapore Kitchen Equipment closed at 15.1 cents on Wednesday, down 24.5 per cent from its IPO price.

The firm distributes and manufactures a range of kitchen equipment, including cooking ranges and refrigeration products. It also provides equipment maintenance services.

Some newcomers have already garnered interest from analysts.

ISOTeam, which is involved in building maintenance and estate upgrading and the best performer among the new listings, was praised as a "growth stock supported by positive industry dynamics" by UOB Kay Hian Research on Aug 2.

"With an established track record of redecorating over 1,500 buildings in Singapore, ISO is the preferred contractor of local government agencies," said UOB Kay Hian.

"(It) is planning to replicate its success in the private sector... We like the stock for its defensive business nature and strong growth potential."

UOB Kay Hian did not have a target price or rating on ISOTeam.

Some Catalist-listed firms also had very small public tranches to their IPOs. This meant that retail investors found it extremely hard to get their hands on the shares at the IPO stage, making it more likely they would buy from the open market after listing.

For instance, Catalist-listed pawnshop operator MoneyMax Financial Services earmarked only two million shares for the public offer, or only 2,000 lots. The placement tranche was much larger at 51.3 million shares.

"Some of them outperformed as the public float for these IPOs was small," said Mr Yong.

Some others, such as fastener supplier PS Group Holdings, did not even have a public tranche, fully placing out their shares to private investors.

Companies with very small public floats may be able to stay above water even months after listing. "The market boils down to demand and supply. If demand is high while the number of shares remains unchanged, the chances of the price being sustained above the IPO price are higher - compared to another firm with a much larger public float," said Mr Yong.