Make it fare for all in new taxi-ride pricing system 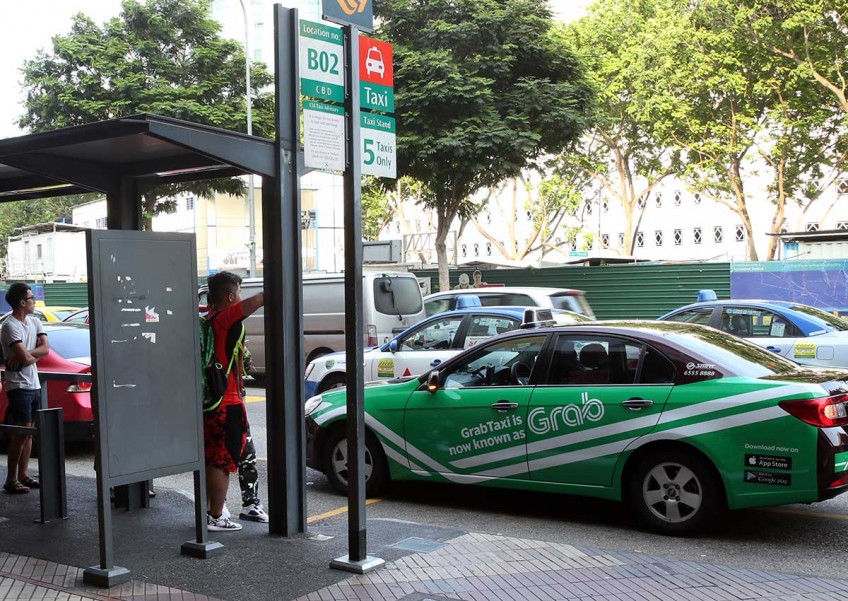 The trend for taxi fares is clear. How they are calculated is still not. Ride-hailing app Grab has introduced a new service that pools all taxis and private cars together, charging rides made in any of them on the same fare structure.

The most attention-grabbing aspect that the new service, JustGrab, brings to taxi fares is the surge pricing - something that metered taxi fares currently do not include.

Such a component is present in Grab's private-car service GrabCar's fares, and also those offered by Grab's main rival, Uber.

Surges in demand during certain times of the day have previously resulted in steep prices for private-car rides on Grab and Uber, drawing the ire of many.

Grab says that JustGrab will charge taxi fares based on current GrabCar rates. But JustGrab has an advantage - the more than 10,500 taxis that are included in its pool.

Since the surge component is based on a demand-supply ratio, GrabTaxi Singapore head Melvin Vu says that the addition of taxis can widen JustGrab's supply base. JustGrab fares should thus fluctuate less and be more affordable.

This surge component is what puts "dynamic" in the term "dynamic pricing" - a term that Grab uses for GrabCar and JustGrab.

But this dynamic pricing is arguably more clear than current metered rates. For GrabCar, beyond the surge surcharge, there's a base fare, a per kilometre rate and a per minute one. Traditional surcharges in metered fares like the midnight and central business district charges are non-existent.

Beyond the surge component, there is another marked departure for taxis that join JustGrab.

Based on Grab's dynamic-price structure, the app will estimate what the final fare will be, and flash the number upfront to the user. The user can choose to decide if he will take the ride based on this fare.

This is different from the current GrabTaxi option where fares are quoted as a range.

It is also markedly different from metered fares, where the rider has to first accept the ride before he or she can find out how much the trip costs - which is only when the fee is tabulated at the end.

To be sure, there is still a market for metered fares - those who want to stay outside of the dynamic-pricing system. Just on Tuesday, I met Mr Loh, a taxi driver who has driven for more than three decades. He does not have a Grab or Uber account, because the company's booking system and street-hail jobs are "enough for me".

But the introduction of JustGrab is in fact the result of market forces at play. Commuters have shown preference for upfront fares rather than metered ones. Taxi drivers have sensed this, arguing for the government to allow them to quote upfront fares.

Hence, it is the upfront component, and not surge pricing, that should dictate how taxi fares should be charged. Case in point: industry leader ComfortDelGro, which is not joining JustGrab, will introduce a "flat-fare structure" based on metered fares.

The surge component also has its market role to play for today's technologically-savvy populace. Real-time data and tracking allow a better estimation of demand and supply. It thus can better capture the marginal benefit and cost to both user and driver that a proposed ride can bring.

But how is it tabulated?

Surge pricing is, in fact, commonplace in today's retail scene - movie tickets are pricier over the weekend; alcoholic drinks are cheaper during 'happy hours'. Clarity of prices and consumers' anticipation of demand makes it easier for them to plan their spending.

As more users and taxi drivers gravitate towards dynamically-priced but upfront-quoted fares, care must be taken to ensure that surge pricing falls within the expectations of both commuters and drivers.

Only then can taxis remain an affordable choice of transport for those who do not own cars.