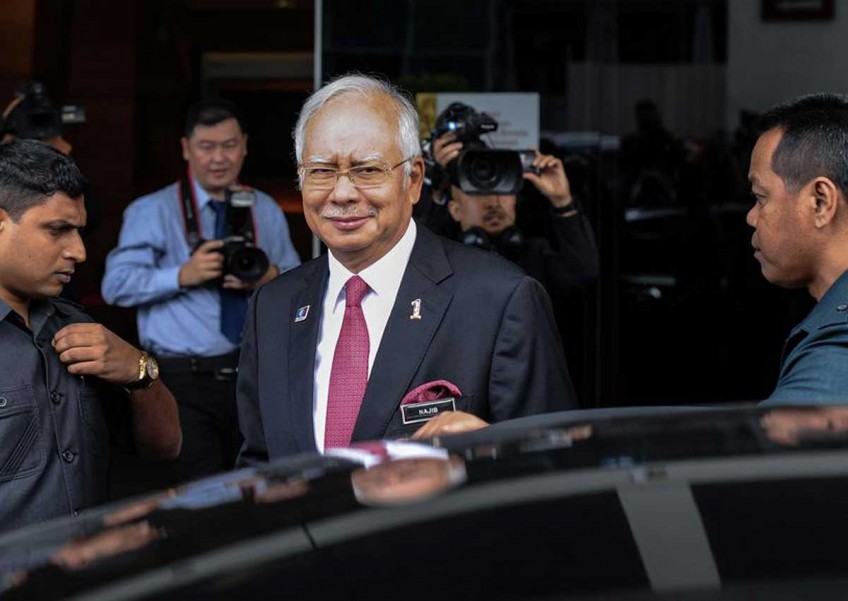 KUALA LUMPUR - Malaysia's anti-graft agency had recommended that Prime Minister Najib Razak be charged with criminal misappropriation, a source said on Wednesday, amid growing outrage after the premier was cleared of any offences in a multi-million-dollar scandal.

The attorney-general on Tuesday closed all investigations of Najib, after reviewing reports from the Malaysian Anti-Corruption Commission (MACC) on a case that involved the transfer of US$681 million (S$974 million) into the prime minister's personal bank account.

But a source at the MACC told Reuters that, when it handed its findings to the attorney-general last month, the agency had recommended Najib to be charged for criminal misappropriation. "It's a pretty straightforward case. We had made recommendations for charges to be filed that the attorney-general has instead chosen to reject," said the source, who declined to be identified or to elaborate on MACC's findings.

The attorney-general's office was not immediately available for comment.

MACC said in a statement it would seek a review of the decision and declined to make any further public comment on the attorney-general's findings.

Najib has been buffeted for months by allegations of graft at the debt-laden state fund 1Malaysia Development Berhad (1MDB) and by revelations of the mysterious transfer of funds, adding to a sense of crisis in a country under economic duress from slumping oil prices and a sliding currency.

Attorney-General Mohamed Apandi Ali appeared to have drawn a line under the scandal on Tuesday, announcing that the money was a private gift from Saudi Arabia's royal family and that no further action needed to be taken on the matter.

Najib has denied any wrongdoing and said he did not take any money for personal gain.

However, popular opinion seems to be against Najib as he tries to rebuild support ahead of a 2018 general election, and on Wednesday commentators and critics denounced the attorney-general's ruling as a whitewash.

"The court of public opinion will continue to try him," said veteran journalist and former editor-in-chief of the state-linked New Strait Times newspaper, A Kadir Jasin. "As for all of us, we have to do some serious soul searching if we care for this country and its future."

Influential former Prime Minister Mahathir Mohamad, Najib's fiercest critic, said in a blog that having that much money in his account was wrong in itself, and the attorney-general's role as both judge and prosecutor amounted to an injustice.

Najib still enjoys the backing of most of the powerful division chiefs in the ruling United Malays National Organisation party, and most of his critics concede that he cannot be unseated.

Moving to stamp out dissent last year, he sacked his deputy, replaced the former attorney-general and replaced him with Apandi and cracked down on opposition leaders and academics.

Human Right Watch said in its World Report 2016 released on Wednesday that Malaysia's human rights situation had deteriorated sharply during 2015, as the government stepped up a campaign of harassment and repression.

Separately, a report by global watchdog Transparency International showed Malaysia's ranking in corruption perception had tumbled four places last year to 54th among 168 countries. Its report is based on perceived level of corruption in the public sector.

"The government must provide the leadership and strong political will to drive the message of zero tolerance for graft," said Akhbar Satar, president of Transparency International Malaysia, who said the 1MDB scandal was one of the factors behind the fall in the ranking.

"The general public are expecting high ethical standards of both conduct and accountability from executive, judiciary and legislative branches."